The Covid-19 pandemic had a disproportionately negative impact on Cleveland public school students of all levels, from pre-school to graduating seniors, compared to national averages, according to a report released late last month from The Cleveland Foundation, the Cleveland Transformation Alliance, Say Yes Cleveland, the George Gund Foundation and others.

And within CMSD, low-income, Black and Hispanic students faced disproportionately negative impacts compared to their peers: Early estimates show those students lost three-times as much learning time, for example.

"The pandemic’s racially and economically driven negative impact on children’s education, health, safety, nutrition, and wellbeing is well documented, as is the effect of the digital divide," the reports authors write.  "At every level of education—preschool, K–12, and higher education—students experienced significant disruption in their education journey: a potentially generation-shattering occurrence. The loss of formal and familiar learning environments and learning opportunities is profound. Children experienced the trauma of upended routines, rituals, and celebrations; of disrupted friendships and relationships; of hunger, homelessness, and job loss; of illness and death in their families. This is trauma that will not dissipate easily, and it extends to all the adults in our community."

Ohio was the first state to close schools in response to Covid, and CMSD was among the later districts to return to in-person learning, doing so in January 2022. In the nearly two years between, enrollment, absenteesism, the digital divide, virtual learning, and workforce issues led to declines across all ages.

The report notes that those two years stymied and reversed progress made in the decade before the pandemic upended learning, including strides made in placing more kids in quality preschools, increasing graduation rates, and more CMSD students enrolling in post-secondary education.

Not only will it take years to remedy those issues, the approach must now be different, the authors wrote: "Prior to March 2020, our focus was on how to improve, accelerate, and broaden the reach and impact of the community’s collective efforts. Today, it’s a very different conversation. The impact of COVID-19 and the current state and federal policy context has underscored the disparities that affect low income families and communities of color."

CMSD and the Cleveland community must seize opportunities to "recover, rebuild, and reimagine education in Cleveland."

The stats are dire across the board.

When the pandemic forced the closure of childhood centers and preschools, young children poised to become ready for kindergarten lacked the chance to do so. And even when they reopened, staffing shortages and capacity limits, as well as financial constraints that left some families undertaking childcare at home, meant fewer Cleveland kids were being prepped for school.


There was a resulting 50% drop in the number of Cleveland kids enrolled in quality preschool seats from September 2019 to September 2020 and fewer seats in general that could be filled — eight early childhood programs in Cleveland have permanently closed since March 2020 and six more remain temporarily closed.

"While the impact on young children will take years to fully assess," the report's authors said, "it is likely that young children who experienced disruptions in their early learning environment will face delays in cognitive development and setbacks in their mastery of basic foundational academic and social emotional skills."

"CMSD students are experiencing high levels of stress, are not feeling supported, and are scared of COVID-19," the report noted. "For these reasons and more, many CMSD students have missed at least 10 percent of classes in the first seven weeks of the 2021–22 school year. Chronic absenteeism is disproportionately affecting students with disabilities; economically disadvantaged students; and Black, Hispanic, and multiracial CMSD students, with over half of these populations on track to miss more than 18 days of school in the current school year."

The effects will be felt not only by students, but across CMSD: "The under-enrollment in large urban districts like the CMSD puts pressure on school budgets, posing threats to course offerings, cross-grade-level teacher collaboration, arts, music, athletic programming, and more."

Cleveland's well-documented digital divide was also a predictable hurdle as CMSD engaged in virtual learning. Only 40% of Cleveland families had high-speed internet at home prior to March 2020, and 68% of Cleveland families had no internet-connected device besides a smartphone. While CMSD partnered with organizations and private companies to provide tablets and laptops to students with hot-spot connectivity, the divide is still a gaping one.

“I think the pandemic exposed a lot of gaps in education and society. There was of course the digital divide— lack of devices, lack of broadband. Broadband is still a challenge in Ohio, today," Shari Obrenski, President of the Cleveland Teachers’ Union, said in the report. "Even though the District has done a lot of work to make sure our families are connected, we know that Internet access in much of the urban area is still difficult. It’s not great connectivity. We have it, but it’s not great.”

And for students looking forward after graduation from a CMSD school, gains in post-secondary enrollment seen during the first year of Say Yes Cleveland, a program that gives eligible four-year graduates of a CMSD high school access to "last dollar" scholarships to 117 private colleges and universities and all 37 public Ohio colleges and universities, have disappeared. 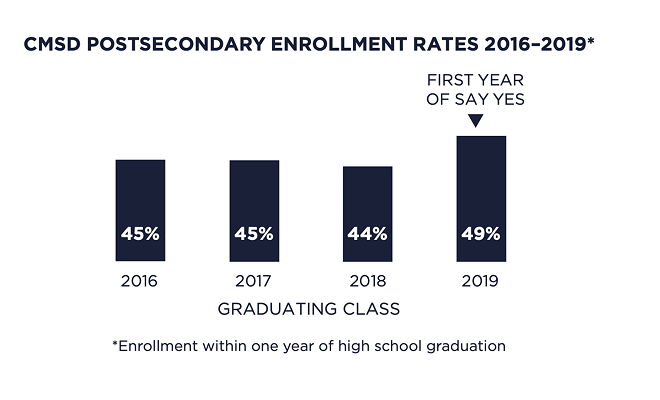 The report's authors, however, see hope, not only in recovering from the pandemic-era of learning but in fundamentally changing how Cleveland approaches education in the future, but only if leaders are willing to embrace it.

"The direct, negative impacts of the pandemic on students, families, educators, early childhood centers, K–12 schools, and postsecondary institutions have been profound, and will continue to be felt for years to come. COVID-19 also brought into sharp relief longstanding inequities students face in our education system, which will continue to hinder educational achievement post- pandemic unless addressed," the report said.

"Our city is full of education champions who are dedicated to rebuilding systems that
have been affected by temporary school closures, the digital divide, lost learning time, and antiquated education policies that often exacerbate inequities for students of color and students with disabilities and English-language needs. An equitable approach to education recovery will be key to shaping a new, forward-thinking, and thriving system for stakeholders, educators, families, and—most importantly—students."