Reports: Browns to Bring Futility Across Pond With 2017 Game in London 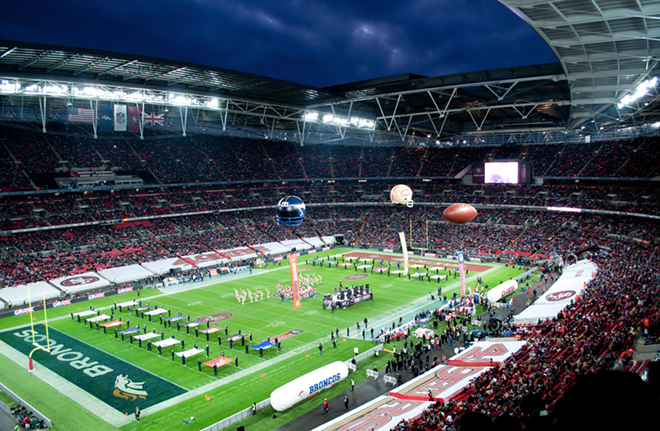 NFL at Wembley, 2010, Wikipedia
According to multiple reports, the Browns will be taking their sterling showcase of ineptitude international next year when they cross the pond and play a game at London’s Twickenham StadiumStadium. The NFL International Series, which has brought three games to London each year for the past four seasons, is expanding to four games next season.

It’s unclear whether the Browns will give up a home game at FirstEnergy Stadium in order to play in the United Kingdom, but judging by the tens of thousands of empty seats at yesterday's home loss to the Bengals, Browns fans won't care if that's the case.

The Browns have yet to comment on the matter. The full batch of 2016 London games is expected to be announced Tuesday morning.

The series itself is an attempt to turn the NFL into more of a global sport. So far, judging by attendance, it's been a success. And while the NFL generally ships some of its less appealing games over the Atlantic, the wisdom of subjecting Londoners to the Browns is debatable.

NFL Commissioner Roger Goodell had this to say in a released statement, “"We continue to be incredibly excited by the passion and love for the NFL shown by our millions of U.K. fans. London is an amazing city. We have had tremendous support from our fans, from Mayor (Saliq) Khan and other government leaders and business partners, and we are looking forward to taking the next step in the U.K. by playing four games in London next season."

No word yet on if the NFL is exploring relegating the Browns to the NCAA if they haven't won a single game by then.