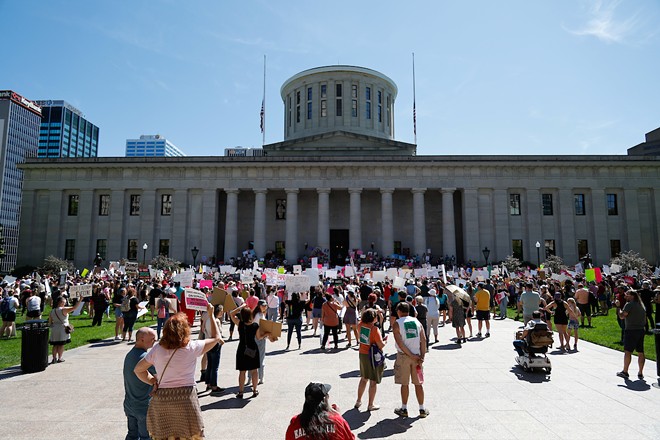 (Photo by Graham Stokes for the Ohio Capital Journal.)
COLUMBUS, OH — MAY 14: Hundreds gather at a rally to support abortion rights less than two weeks after a leaked Supreme Court draft opinion showed a likely reversal of Roe v. Wade, May 14, 2022, at the Ohio Statehouse, Columbus, Ohio.

A second constitutional amendment introduced in Ohio to protect reproductive choice in the state likely will not be on the ballot for November, because it would need to make it through a Republican supermajority first.

“The amendment prohibits the state from discriminating in the protection or enforcement of this fundamental right,” according to an analysis by the Legislative Service Commission, adding that the amendment would bar the state from penalizing or prosecuting a person “based on the individual’s actual, potential, perceived or alleged pregnancy outcomes.”

The proposal, if passed by the General Assembly, would go to the ballot for the general election on Nov. 8 of this year.

This is the second push for a constitutional amendment to come before the GA. State Rep. Michele Lepore-Hagan, D-Youngstown, and state Sen. Sandra Williams, D-Cleveland, introduced an amendment proposal in early May to make surgical and medication abortions legal in the state of Ohio.

But Republican measures to make abortion illegal in the state started before the Dem push to codify reproductive rights. Trigger bans that would take effect if the U.S. Supreme Court overturns or modifies the 1973 Roe v. Wade decision via a Mississippi case, Dobbs v. Jackson, are awaiting further consideration by the Ohio legislature.

“There simply isn’t space for the Ohio General Assembly to insert themselves into the personal private healthcare decisions of Ohioans,” Antonio said in announcing the second constitutional amendment proposal.

But the Democrats’ battle with a Republican supermajority may mean they won’t get the measure on the ballot in November, meaning voters won’t have their say in the matter quite yet.

A spokesperson for Senate President Matt Huffman said due to the GA’s summer break, “we aren’t taking up any bills until after the election this fall.”

Spokesperson John Fortney also said Huffman has made previous comments saying he’d prefer to wait and see what the U.S. Supreme Court decision rules before passing “anything related to Roe.”

“That way, any bill getting a vote would comply with the (U.S.) Supreme Court’s guidance,” Fortney wrote in an email to the OCJ.

As of now, abortion remains legal in Ohio up to 22 weeks gestation.