Review: Card Games for Horrible People at the Side Quest in Lakewood

Jason Meek
The Side Quest in Lakewood (17900 Detroit Ave., 216-228-1212) has the familiarity of a dive bar, but if you look closer you’ll notice the retro pixel-art Final Fantasy characters on the fridge, action figures stuck along the top of the walls, and a life-size replica of Link’s shield from the Legend of Zelda mounted alongside the usual beer signs.

This is a bar for craft beer geeks who are also just regular geeks.

It’s one of many board game bars across the country, offering a pretty wide (and affordable) selection of craft brews and an equally diverse selection of tabletop games to play. The bar’s name has its roots in role-playing games like Dungeons and Dragons, but the game collection covers everything from the classics like Monopoly to modern favorites like Settlers of Catan.

Games can be rented for a dollar per player, and the cozy quarters of the bar makes it feel like getting together in a friend’s living room on a Friday night, no matter what day of the week it is. The appeal of playing at a bar is the chance to meet new people, and the sociable geeks the Side Quest attracts will usually invite strangers to join a game.

One of the easiest times to stop by and jump into a game is every Wednesday night at 8 p.m., when the Side Quest hosts a bar-wide game of Cards Against Humanity.

If you’ve never heard of the self-proclaimed “party game for horrible people,” it’s simple to understand – each round, players are given a question or fill-in-the-blank prompt from a black card, and then try to give the funniest or most offensive (preferably both) response out of their hands of white cards. 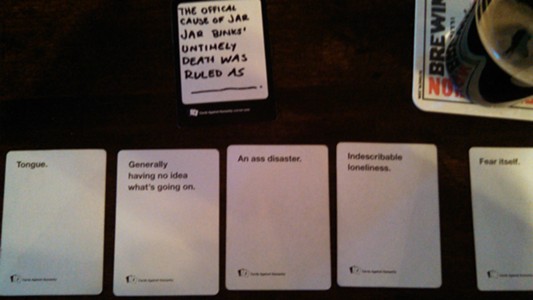 Jason Meek
In the Side Quest’s “Bar Against Humanity” version, play alone or as part of a team to get a stranger to say something politically incorrect over a microphone. The winning team nets an Awesome Point and gets to judge the next round and read everyone’s sick jokes out loud.

Some of the highlights of the night:

Q: What are my parents hiding from me?
A: Interspecies marriage.

Q: This week’s Cosmo: Spice up your sex life by bringing ________ into the bedroom.
A: Three consecutive seconds of happiness.

It’s an easy game to jump into, and can involve as many players as can physically fit into the cozy confines of the Side Quest. Think of it as a funnier alternative to pub trivia, except there are no right answers. Just horribly wrong ones.

There are also prizes handed out throughout the night. The team who reaches 10 points first, or whoever is in the lead by 10:30 p.m., gets their choice between a $10 Side Quest gift certificate, or whatever’s in the mystery box. Only once in the bar’s history has anyone resisted the allure and intrigue of the box.

“We had one team called Two Broke Girls, and they chose the gift certificate,” Bridgeman tells me. A few seats away, the winners of that night’s game, Team Tiny Nipples, are daring each other to eat the chocolate-covered scorpions they won in the mystery box.

The bar has been hosting Cards Against Humanity every week since last October, not long after it opened at the end of August 2014.

The Side Quest’s deck has some written-in submissions from bar patrons, adding some extra geeky references to Game of Thrones, Harry Potter or Star Wars. There was one time I had to use a microphone to explain to a room full of people what “Star Trek slash fiction” refers to (be careful if you Google that). But the core of the game is still dick jokes, so it’s not too hard for anyone to join in.

Admittedly, the canned responses can get old after several dozen games – one of the white cards is literally “No longer finding any Cards Against Humanity card funny” – so Bridgeman is planning to mix things up by trying out a geeky Side Quest version of Family Feud.

Bridgeman has been gathering the survey answers for Family Feud from other geek bars around the nation, so there’s less chance of Side Quest regulars coming in and knowing all the responses.

The first night of Family Feud will be an experiment, but if the response is positive, there will probably be a rotating schedule between the two games.

No matter what, Cards Against Humanity has been a proven hit, and continues to attract horrible people (who are actually quite friendly despite all the dead baby jokes) to the Side Quest every Wednesday night.

There’s few better ways to bond with total strangers than to enjoy some good drinks and discuss the most satisfying way to kill Jar-Jar Binks. P.S. — If you saw the photo and were wondering, it was a tough choice, but I gave the Awesome Point to “an ass disaster.”