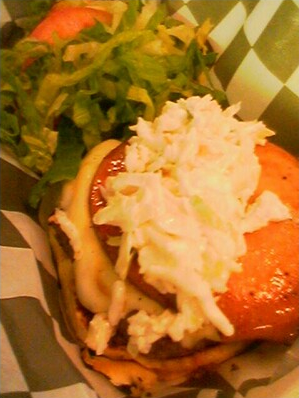 As you probably know by now, Michael Symon has opened two new joints within the Q to provide Cavs fans with tastier edible options during games. During Tuesday night's preseason affair downtown, I wandered over to the "B-Spot" to sample some of his offerings. (It looks like a prototypical Symon restaurant. It's by the Cavs team shop and it's hard to miss if you're looking for it.)

If you've ever gotten the wonderful happy hour burger at Lolita (english muffin, egg, bacon), you know the Iron Chef can throw it down when it comes to burgers. Easily one of the top five burgers I've had in Cleveland. So a menu of such succulence at the Q is a welcomed alternative to the hot dog and pretzel fare patrons are usually subjected to at sporting events.

Tuesday night I went with the "Symon Says" burger ($8.50)— fried bologna, coleslaw, American cheese, and whip sauce. The burger came out efficiently, although I'm not sure whether this was just because of the low attendance for the game or if this kind of speed is going to be normal at the "B-Spot" during the season. 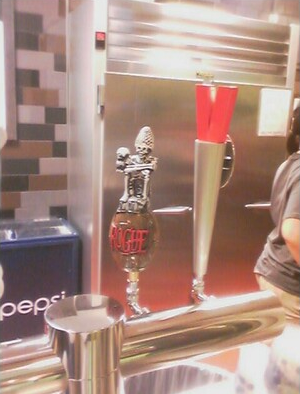 As for the burger itself: Thick, juicy, moist, cooked to a nice medium-well, slightly greasy, incredibly delicious. The fried bologna wasn't totally fried, just sort of browned and warmed through, although putting any sort of processed meat on a burger is going to get an "A+" in my book. As for condiments, the usual suspects — ketchup, mustard, mayo, relish — are available, as well as pickled onions, jalapenos, a crushed pepper relish, and some other stuff I forget at this moment.

Got fries too, which were just as tasty as the ones you get at Lolita. Thin, fragrant, properly salted, and great for dipping in the burger juices.

Couple of other things: 1) Check out the beer offerings!! Victory (Hop Devil) and Rogue! Pricier than the Bud or Miller or whatever domestic swill you find throughout the rest of the arena, but if it's reasonable to drop $8.50 on a delicious burger instead of $4.50 on something borderline disgusting, it's also not only reasonable but logical to pay for the good beer. Bravo, good sir.