Review: "Wrestling Jerusalem" Scratches the Surface of the Israeli-Palestinian Conflict 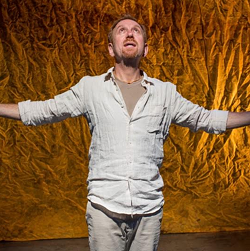 Ken Friedman
Playwright and performer Aaron Davidman is touring his one-person play Wrestling Jerusalem, which is now in residence at Cleveland Public Theatre. And while it is more of a “tour de feelings” rather than a tour de force, it still has some clear and effective moments.

It is Davidman’s goal to show both sides of the endless Israeli-Palestinian conflict, as equitably as possible. So he takes on 17 different characters as he describes his visits to the Middle East with quick cameos of various individuals — from religious leaders to the man on the street, from a military man to a physician. These all add up to a clear portrait of the deeply frustrating situation facing the two societies that simply can’t find a way out of their morass.

If that is the sum total of what Davidman wants to achieve, he does it splendidly. Of course, some in the audience may yearn for a bit more involvement and connection with this perplexing saga that we have all seen played out in the media for decades. And for those people, this play falls short of the mark.

Because by taking a panoramic, 20,000-foot look at this topic, Davidman rarely gets down into the personal lives and feelings of the characters he introduces. Just when we begin to get interested in one person, he or she disappears and we’re on to the next. In addition, many of his characters aren’t differentiated enough in posture and inflection, so that it’s hard to tell them apart. They are not so much actual persons as human representations of various aspects of the Israeli-Palestinian conundrum.

The exceptions to this are telling, since it is in those moments when the play really comes alive. In one, a doctor explains how babies are introduced from birth to the danger and fear of their new world, as their mothers’ eyes are pulled away from their own as they peer at the violence outside their doors. In another, Davidman depicts a stoner who actually has a persona we can grasp.

If we felt the narrator had more at stake in his journey of discovery, we might begin to relate on a deeper level. But Davidman remains an honest broker to the end, which is admirable in one way but distancing in another.

The staging by director Michael John Garces is simple and effective, augmented nicely by a painted, crumpled canvas backdrop that is lighted to evoke different moods and locations.

Most of the segments, however, deal with issues we’ve all heard about, and little new or surprising is uncovered. But if you’ve somehow missed all this turmoil, Wrestling Jerusalem is a dandy way to bring yourself up to date. If you’re well acquainted with the situation, however, this may seem a bit more like arm wrestling.