Could Cleveland and hair metal be breaking up at last? Talk amongst yourselves. 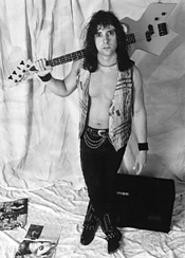 Bassist Dave Belanger helps keep hair metal alive for the nostalgia crowd.
A few weeks ago, I stumbled upon some startling news: The citizens of North Royalton, Berea, and Elyria appear to finally be losing interest in hair-metal music.

"We're just not getting the crowds we used to," laments Lori Ludeman, assistant promoter at the Flying Machine metal club in Lorain. Seven years ago, a Quiet Riot or Slaughter show would draw 500 people. "Now, you'd be lucky to get 100 to 200."

The news that ear-splitting squeals might soon be a lost language really set my world awry. I happen to have a fair amount of street cred with the bandanna-tied-around-leg set, having attended Normandy High School in Parma circa 1986 -- an uncharacteristically golden time for kids who wore holey Def Leppard T-shirts and left the home-perm solution on too long. Through my locker partner and his ever-encroaching Dokken posters, I came to believe that, no matter how much I tried to banish hair metal from my personal space, it would forever command a slice of psychic pie. I might someday move as far away as Old Brooklyn, but Parmatown Mall would always be my true home.

Trying to root out truth from rumor, I sought out several top hair-metal experts in the 440 area code to comment on the dip in enthusiasm. Dave Belanger, one of the city's foremost authorities on spandex pants, says he prophesied fluff rock's death here as early as 1994. "It's lived on mainly as a nostalgia thing," says Belanger, who plays bass in 1988, a cover band that cranks out a scorchin' version of Ratt's "Round and Round." "People who do come out, come out to relive the old days."

This summer, Belanger attended all of the Biggie-sized hair-metal tours that came through town, including Poison/Tesla and Warrant/Ratt. As far as he could tell, the stands were still full. "If the crowd is smaller, it's only very slightly."

Not so in other parts of the world, where eyeliner music has been old news as far back as 1990. That was the year Belanger headed for L.A., hoping to hit it big with a tousled 'n' teased outfit called Pretty Vacant. "We got there, and there were hundreds -- thousands -- of guys just like us," he remembers. "We played all the big clubs, but who cared? No one."

After seven months, he packed up his bass and headed home, just in time to watch local mullet preserves like Spanky's and the Akron Agora shut down in succession. To survive, he had to forgo his self-penned party anthems in favor of proven crowd-pleasers like Warrant's "Cherry Pie."

Onstage, with his long black hair and raccoon-rimmed eyes, he looks like a cleaned-up version of Alice Cooper. "I got sick of playing to maybe four kids," he says with a touch of melancholy for his all-originals days. "Now, I'm out there playing to 80 people. I love all the attention, but I miss the possibility of being a real rock star."

At the Record Exchange in Parma, Poison's Greatest Hits remains a decent seller, but White Lion and Winger releases have been living out their last days as beverage coasters for the staff.

"Our sales started going down when a lot of the big groups disappeared," says store manager Daniel Williams. "Mötley Crüe split up and started doing their own stuff, and Poison got back together, but didn't put out a new album. They weren't really getting backed by the major labels. The boy bands -- they're the ones that get pushed these days."

Pretty soon, even five-for-one package tours that conveniently stopped in Cleveland, Akron, and Massillon couldn't save the Vince Neils of the world. "Most of these bands have gone through six singers and nine guitar players," says Cleveland rock critic Anastasia Pantsios. "You've got two different Ratts -- Stephen Pearcy and the guys who hate Stephen Pearcy. They come back in so many configurations, there's diminishing returns." And in Neil's case, ever-expanding waistlines.

Admittedly, it's tough to draw clamoring throngs when you're competing with Jimmy Buffett and the Beach Boys for a demographic who would rather be home applying sealant to their driveways. "As the audience gets older, they go out less," says Pantsios. "And to people under 30, hair metal doesn't mean much."

Especially when some of the acts not only never should've come back -- they sucked during their first 15 minutes. "Pretty Boy Floyd was always horrible," says Pantsios. "They had half the stuff on tape, because they couldn't play. When you bring back the dregs, people remember how bad it could be."

Really, the only silver-pants crew that can still get it up are the dudes in Poison, who had the cojones to disband right before going platinum in the summer of 1991. "That's when C.C. Deville made the famous statement that he'd rather do drugs than be in the band," says Pantsios. "That lasted seven or eight years, then two or three years ago, they came out and did a killer show.

"They didn't try and be modern, like Skid Row tried to sound like Alice in Chains. They came back and did their thing -- with the same four guys -- and they're selling tickets."

The bright spot in this steady decline is that now the few remaining fans can actually party at the Budgetel with their idols from 12 years ago. "What's cool about having 100 people at a show is, you have a lot better chance of meeting the band," says Ludeman, who has six photo albums filled with snapshots of her posing with various guitar shredders.

So don't break out the glittery purple coffin yet. Maybe just the fire-powered wheelchair. There's a little bit of Yngwie Malmsteen in all of us. And if we ask real nice, he might make himself available to play our office Christmas party someday.