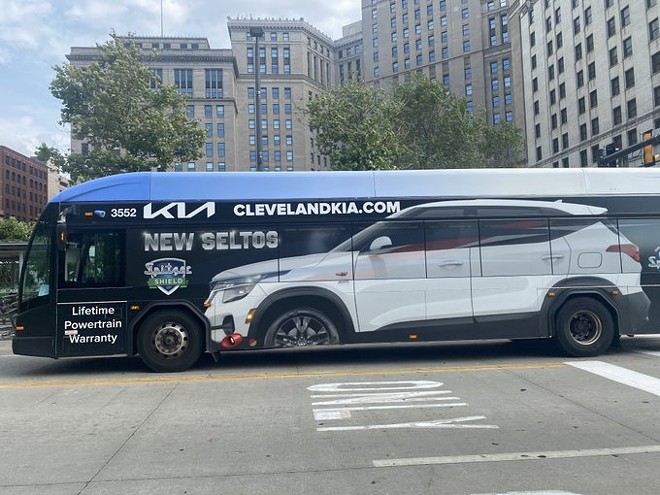 In a sales agreement with the Greater Cleveland Regional Transit Authority, the Spitzer KIA auto dealership purchased advertisements that now prominently appear on the exterior of five RTA buses.

The ads, in which larger-than-life Kia vehicles are superimposed over the buses' side paneling and windows, direct consumers to ClevelandKia.com. The ads will appear until the expiration of the contract in June, 2023, according to an RTA spokesman.

The idea of a public transit agency selling advertising to an auto dealership seemed counterintuitive to Noelani Fixler, a geography student at UC Berkeley who was visiting family in Cleveland in July when she posted her disapproval of the ads on social media.

Fixler is originally from upstate New York. She told Scene Tuesday that living in Berkeley has changed her perspective on public transit because it's the first place she's lived where she has to get around without a car. When she visits cities now, she said, she assesses their public transit from a more critical lens.

Elaborating on her social media post, she said she thought the KIA advertisement was "ridiculous" because transit agencies like RTA are in direct competition with cars. They should be promoting ways to get people out of personal vehicles, not promoting the vehicles themselves.

"Also, putting a car advertisement on a bus is degrading to riders, many of whom are low income and endure longer commutes, delays, and missed service due to inadequate public transportation funding," Fixler said. "This messaging from GCRTA enables the rhetoric that people should strive to upgrade from public transportation —a completely backwards notion during a climate crisis."

Fixler, who told Scene she hopes to pursue a career in transportation planning, also said that an advertisement of the size and color of the Spitzer KIA reduces visibility from inside the bus, which negatively impacts the rider experience. She said she believed that RTA should be more selective about the ads it accepts.

According to RTA spokesman Robert Fleig, however, RTA's support of "improved mobility advancement" in Northeast Ohio includes a "multitude of mobility possibilities, to be determined by the individual customer. Serving the public transportation sect of the mobility industry does not prohibit the acknowledgment of alternate mobility options."