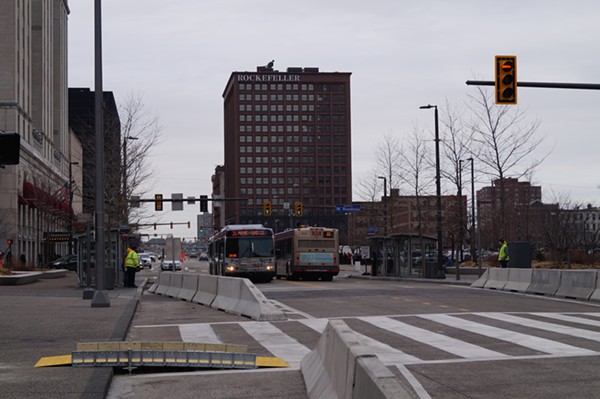 Sam Allard / Scene
Like ships in the night, the No. 26 eastbound and the No. 22 westbound pass on Superior.
Former RTA bus driver Antoinette Peterkin, who struck and killed a 69-year-old woman on Public Square in December, 2016, was sentenced to probation and community service at a sentencing yesterday. The family of Joan Kuendig, the victim, asked that Peterkin serve no jail time.

"I don't know how I take any comfort in punishing a mother for taking away another mother," Bill Keundig, son of Joan, told Cuyahoga County Court of Common Pleas Judge John Russo at the sentencing. (Cleveland.com's Cory Shaffer reported that the proceedings were emotional, and that Peterkin broke down in sobs as she apologized to the Kuendig family.)

Peterkin was fired by RTA shortly after the December incident on Public Square. An RTA incident review committee found that Peterkin had slowed, but not come to a complete stop, before she turned onto Rockwell from East Roadway.