Akron’s World of Rubber Museum will close permanently at 4:30 p.m. today. After 61 years, the mini-museum will shut its doors a final time with no additional fanfare, echoing the general reception it’s met in recent years.

The World of Rubber resides on the fourth floor of Goodyear Hall. And, with all due respect to the Rubber City institution, it’s not much of a museum. A half-dozen small rooms house low-tech displays and artifacts commemorating the history of rubber and the company, from natural Indian rubber trees to pictures of Goodyear tires used on the moon rover in 1971. A filmstrip display tells the story of an Earthmover construction tire that stands seven feet tall and weighs a three quarters of a ton. With muffled audio and a scratchy picture, the AV presentation looks like it wouldn’t have lasted another year. 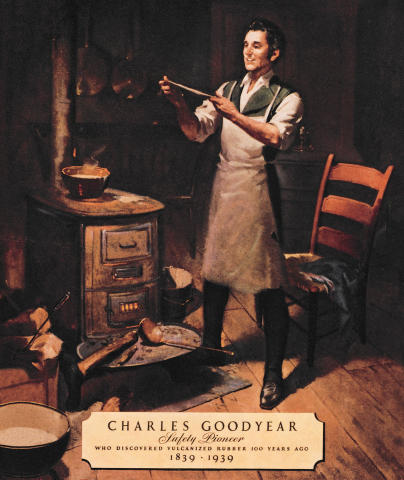 Also present is memorabilia belonging to Charles Goodyear, the Connecticut inventor who died broke years before the world discovered a mass use for vulcanized rubber. Though he wasn’t connected to the company, it borrowed his name in 1898, 38 years after his death, and a three-quarter-scale statue of him greets visitors in the doorway. Beyond, Indianapolis 500 race cars are crowded into a room with other Goodyear-related products — from an artificial heart to a section of an airplane. None of the attractions are nearly new.

The museum was a better draw in an era when roadside attractions were a hot ticket. In recent years, it could go days without visitors. Since news of the closing broke last week, traffic has taken a sharp upturn. Between100 and 200 visitors daily have toured the facility — numbers unheard of recently, even on the rare days when a tour bus stops by.