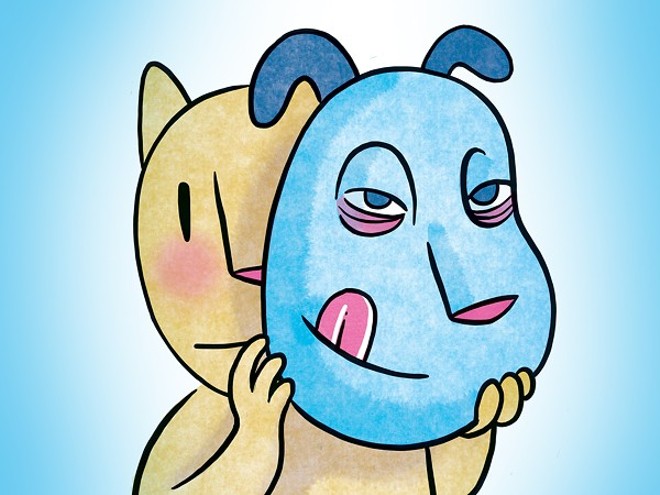 Franco's first bit of advice is to remember that you are not your alter ego.

"It's a beautiful and sexy part of you that you have the opportunity to show to the world," says Franco. "But it's not all of you. That will help you stay grounded."

"Now lots of the people who fetishize and sexualize you are your fans — they're your audience, they're the ones who pay your bills, and you have to recognize that and you do have to keep them interested," says Franco, "but you don't have to give them all of your time and attention. Because at the end of the day, it's your work and you've got other shit to do. You will meet people both in and out of the industry who recognize that you are a real person, with a real life, and who will get to know the real you. And you'll sometimes find that some of the people who fetishized you at first don't anymore once they get to know the real you."

"I like to hang out with people who work in the same industry," says CagedJock, "because they don't sexualize me. Devin and I have been friends since 2019. He's super sexy and I adore him. While other guys might only see him as a fantasy figure, I don't. Because I know our work doesn't define us 24/7. We're friends."

I'm a gay male in my thirties, and during the pandemic I stayed with a straight male friend and his girlfriend. He'd periodically been flirty with me over the years — sending me nude photos and drunkenly telling me that he loved me. When his girlfriend was away visiting family, we got drunk together. He bought all the alcohol, he mixed it, and he served it. During this time we had a series of drunken encounters. The first time he took out his cock and asked me if I wanted to play with it. There was some brief licking and he grabbed my hair and finished on my face. He hugged me and rubbed my back after. The next two times were less serious, but he took off his shirt and pants. On one of those occasions his girlfriend called and he put his clothes back on, took the call, then came back and took his clothes off again. All three times it happened, he was fully engaged and communicating his wants and initiating things.

His girlfriend eventually found out about one of the incidents. After a month of drama, he told her everything and they broke up. Shortly after, he claimed that I took advantage of him and claimed he was too drunk to give consent! I'm not sure what to make of this. First, he's the one that supplied the alcohol and made us both really strong drinks. He also drinks a lot regularly, so his tolerance is much higher than mine, but we drank the same amount and I was much drunker than he was. Third, he continued to hang out with me until his girlfriend found out.

I am deeply hurt. I've lost two friends — which I admit that I'm partially to blame for. I knew they were together. But I don't know what to do about the accusation that I forced him to be sexual without his consent. I've played events over and over in my mind, and I don't understand how he could say this. He supplied the alcohol, he was an active participant, and when I asked if he really wanted to do this, he said yes. I'm not sure if he's gaslighting me or if he honestly remembers things differently.

At some point in our gay lives, every gay man learns not to mess around with a friend's drunk straight-identified boyfriend. No matter how many dick pics they send us, no matter how much they claim to wanna, when it comes to shit — as it invariably does — the gay guy is gonna get the blame. It's a lesson most of us learn earlier in life (I was 16 when I learned it), BLAH, but it's a lesson most us learn after messing around with the drunk straight-identified boyfriend of a friend. We fuck around, we find out.

Anyway, your male former friend obviously wanted to mess around with another dude — he wasn't sending you dick pics by accident — and the drinks he made were as much about lowering his inhibitions and yours (about cheating with him) as they were giving him some plausible deniability ("Man, I was so drunk last night!") if the worst should happen. And it did: you fucked around, she found out. But after you guys got caught — which almost everybody does — instead of taking responsibility or coming out as bi or bi-curious or at the very least heteroflexible, BLAH, your former friend weaponized the toxic stereotype of the predatory homosexual against you. It's understandable that you're upset. If it'll make you feel better — and it would certainly make me feel better — send screengrabs of the dick pics he sent you to him and his girlfriend. Because if anyone was making passes here, it was him. If anyone was taking advantage here, it was him.