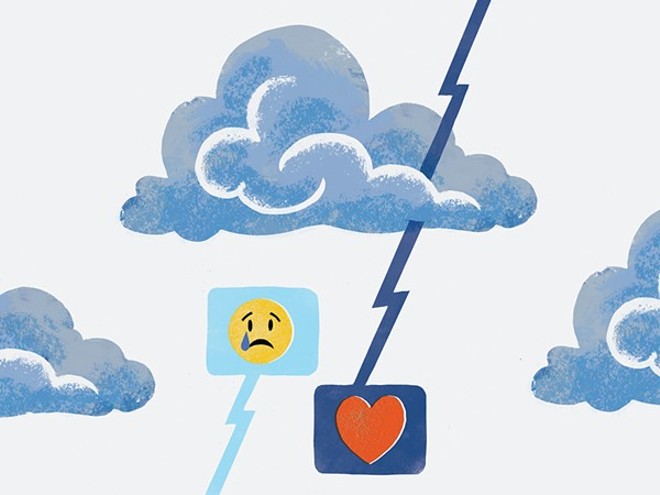 
My husband recently passed away. He was a wonderful person, and we had 12 great years together. He was also very, very organized. His death was an accident, but everything was in order. He even left a note in a sealed envelope for his lawyer to present to me. It was one last love letter, Dan. Our relationship wasn't perfect, no relationship is, but that's who he was. Or that's who I thought he was.

My husband was a very good-looking man who took meticulous care of his body. We actually met in a gym at a hotel. He wasn't conceited, which I think may be because he didn't come into his looks until he was in his 20s, but he enjoyed the effect his appearance had on others. In addition to his last love letter and other documents, I was given a list with the passwords to my husband's social media accounts. I made the mistake of looking at his messages on Instagram. He exchanged private images with hundreds of women and gay men all over the world. Not just photos of him shirtless. Photos of him fully nude from the front and back, images of his genitals, even video clips of him masturbating with his face clearly visible.

I knew he had exhibitionistic tendencies. Years before we met, he got in legal trouble for exposing himself in a public place. He sought help for impulse control and never did something like that again. But he always had a very high libido, much higher than mine, and he masturbated frequently, and public sex remained his biggest fantasy. I didn't judge or shame him for any of that. We jokingly called masturbation "his thang" and sex, which we had roughly once a week, "our thang," and one time, when it seemed safe, we did manage to have sex in public. He expressed an interest in opening up our relationship years ago, but I am monogamous by nature and he agreed to keep our relationship closed. And I believe he did. I've read through all his messages with these strangers, and there are no mentions of any meetings. I've seen dozens of messages from people who wanted to meet in person, and he always turned them down. But he never turned down a request for more photos.

Help me understand this. I can't tell anyone else about this, and I hate sitting here feeling like my marriage was a lie.

P.S. Also, men? My husband was straight. Why was he sending photos to gay men?

I'm so sorry for your loss, WIDOW, and I'm so sorry your grief has been complicated by what you found in your husband's Instagram account. But you shouldn't for a moment doubt the love of a man who wanted to make sure you got one last love letter if he should die unexpectedly. That's not something a person would think to do for someone they didn't truly love. Your husband was who you thought he was. Your marriage wasn't a lie and your husband wasn't a liar, WIDOW, it's just that your grief — like you and your husband and your marriage and anything human beings do or feel or touch — is imperfect.

So far as you know, WIDOW, your husband never cheated on you — and after reading thousands of his DMs, and since your husband didn't think you would ever see those DMs, it's safe to say you know everything. And what you know now that you didn't know before is that sharing pictures with strangers was one of your husband's "thangs."

Now I'm going to ask you to make a leap, WIDOW.

Instead of seeing what you found on Instagram as evidence of your husband's unfaithfulness, WIDOW, try to see it as something that made it possible for a man like your husband to remain faithful. Think of those DMs like a pressure-release valve. On Instagram, your husband could expose himself to strangers who wanted to see him naked — avoiding both consent violations and legal trouble — without exposing himself to the temptations of face-to-face encounters, WIDOW, temptations that might've led him to violate the monogamous commitment he made to you and, like all people who make monogamous commitments, sometimes struggled to keep.

One person can't be all things to another person sexually. People can ask for monogamous commitments, of course, and we all have a right to expect consideration and compassion from our partners — and not having the needs we can't meet or the ways we fall short thrown in our faces is one way our partners demonstrate consideration and compassion. Your husband needed more attention than any one person could ever provide. He didn't rub that in your face. He cut an ethical corner by swapping DMs with strangers to meet a need you couldn't — but if getting that need met the way he did made it possible for him to stay in your marriage and stay faithful to you, perhaps you benefited, too. And while your husband should've asked for your permission — while he should've gotten your OK — if you had found his DMs while he was alive, WIDOW, he would no doubt ask for your forgiveness. Think of the years he gave you and the love he showed you and ask yourself if you could give him the forgiveness he would be asking for if he could. Then give him — give yourself — that gift.

P.S. Your husband's willingness to accept attention from gay men is another sign he was one of the good guys. Straight guys who are secure in their sexuality are much more willing to accept compliments from gay men these days — some straight guys, like your husband, even seek them out.

I live in North Carolina. One of our two senators, Thom Tillis, is a Republican who tested positive for COVID-19 after cavorting with the president at the White House. But when I opened the local paper, lo and behold, the top story wasn't the ill Tillis but the admission by his Democratic opponent in the senatorial race, Cal Cunningham, that Cunningham had, in fact, exchanged "sexts" with a woman who is not his wife. I braced for dick pics or kink revelations or worse when I clicked through to the website that broke the story. At the very least I expected explicit references to sex. But nope! We're being told to clutch our pearls — and to vote for Tillis — over some G-rated text messages about "lots of kissing" and a vague wish to spend a night together. I guess these laughably tame exchanges round up to salacious because both parties are married to other people. It would be funny if it weren't so sad and if it wasn't threatening the Democrats' efforts to retake the Senate.

So the worry here is that the people of North Carolina are going to vote for a U.S. senator who can't open his mouth without Donald Trump's nutsack falling out — Senator Thom Tillis — over Cal Cunningham because Cunningham sent a few not-that-dirty text messages to a woman who isn't his wife. Sigh. Tillis has literally spent the last four years tongue-bathing the balls of a man who has cheated on every wife he's ever had and been credibly accused of sexual assault by two dozen women.

By association and proximity, Tillis has a far more scandalous record. But whoever wins the Senate election in North Carolina, there's not enough mouthwash in the world to get the stench of Trump's taint off Tillis's breath.

I sent you a letter yesterday. Today I told my husband I want a divorce. So I didn't need any advice from you after all. Once I laid it out in my letter to you and thought about the last three years and the amount of struggling with this I've gone through, I realized that it was SO. DAMN. OBVIOUS. There was no question. There was only an answer: divorce. It's been horrible the last couple days, but things are starting to feel a bit better. The worst part is the intense pain that I've caused him. He loves me so much, and it's painful to tell him that I don't love him the same way. But I'm holding tight to my firm belief that in a few years, he'll understand that I did this out of love — for him and for me. Thank you. Even though you did not need to respond, just being there to write to helped.

I'm happy it helped just to write the letter, WWE. I read your letter, and I agree: You're doing the right thing for yourself and your husband. Best of luck to you both.