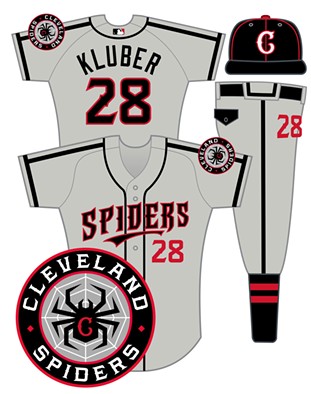 Ben Peters
The Cleveland Spiders, designed by Ben Peters, is your winner in Scene's Redesign the Tribe competition.

We conceived the competition as a fun, practical way to continue the conversation about a name and logo change for the Cleveland Indians. That conversation arrived, aggressively, on our radar after the scorn and derision from the national media who were responding to Chief Wahoo's prominence during the 2016 MLB Playoffs.

(For the record — though most of our readers are aware —we've been railing against Chief Wahoo for years.)

The conversation about Chief Wahoo is one that Indians' owner Paul Dolan has now reportedly had with MLB Commissioner Rob Manfred. And while no announcements have been made, we're excited about the possibilities for change.

With all that in mind, we invited local designers to submit their ideas in our contest.

We whittled down the submissions to a Top-40 and presented them to voters at Redesignthetribe.com. After the allotted voting period, the top five vote-getting designs were as follows:

THOUGHTS: I'm on record saying that Spiders is not the best idea because (a) there is really no connection between that franchise and the one which became the Indians; and (b) looking forward is always better than looking backward. I decided, however, that design should be the top consideration, and the Spiders kit looks the best of all five.

Beyond that: I think the Tribe design is pretty spiffy, but I worry that keeping with anything Native American-inspired is a bit problematic. Maybe if there was some buy-in and blessing from Tribal leaders I would change my mind. Same goes for Arrows, but it's further down the list because I don't like the execution as much. As for the Sentinels/Guardians: I'm a little freaked out by those dudes on the bridge. Every time I drive over it I feel like they're gonna come to life like some monster in "Doctor Who" or like the Engineers in "Prometheus." I don't need that kind of nightmare fuel in my baseball, thanks.

Thoughts: The Spiders had the best design and concept. I liked how it traced our early pre-Indians history through its name and liked the opportunity to absolutely rebrand the Cleveland team with completely new directions. I also liked this about the Sentinel and its connection to the Hope Memorial Guardians. The design was very "super hero" and strangely meta-Indian-like with the feathers and could be quasi-Chief Wahoo-esque. But the spiders really got me caught up in the web of fun marketing possibilities.

Liz Maugans is the co-founder and executive director of Zygote Press, Cleveland's fine-art printmaking workshop. She has been a recipient of the Cleveland Arts Prize and the Creative Workforce Fellowship.

Thoughts: You have to get the name right before you can focus on the design, and to me, Tribe and Spiders are the only two names of these five that are workable. The Guardians (or Sentinels) of Traffic are cool and all, but we’re just talking about statues on a bridge here with no real back-story, and I don’t suppose vehicular traffic should be a point of civic pride, anyway.

I’d have ranked the Tribe first if the design weren’t Native-American themed. A design that would have reflected an all-inclusive “Tribe” would have been great. Which leaves us with the Spiders, as talented a creature and as skilled a hunter as there is in the animal kingdom, also with a Cleveland connection and underrepresented as a mascot in the sports world.

Pattakos, a longtime friend of Scene's, blogs and tweets as @ClevelandFrowns and wrote the definitive "Curse of Chief Wahoo" piece for Scene, in 2012.

Thoughts: We'll start by saying that the variety and professionalism of the initial submissions both surprised and delighted us. The top five vote getters do not necessarily reflect our personal favorites. We'd like to mention the submissions by Gary Bostwick (The Industrials) and by Chris Giorgio (The Inventors), which represented to us the most original and fully realized work in the competition.

Of the finalists, we selected Tim Schifle's Guardians as our top choice, in large part because of its execution. The concept itself was articulated as an homage to the Indians and multiple design elements (including an alternate jersey and alternate uniforms) were presented. In truth, we prefer "Sentinels" as a name — Guardians keeps the "-ians" of Indians, but let's face it; it's a milquetoast moniker; might as well be "Stewards" or "Executors" or "Babysitters." The Sentinels' primary logo, as presented by Christian Colbert, was a little busy for our tastes. We like the away unis quite a bit though.

The Tribe and Arrows entries — in particular, the crisp submission by Matt Jeffries — were slick and well-executed. But like other panelists, we think there's value in a new name and logo that distances itself from Native American themes and imagery, even though we recognize that images like the feather are well-intentioned.

The other panelists have said enough about Spiders, but we're certainly on board.