School Board Bans Bible Due to Sexual, Socialist Themes 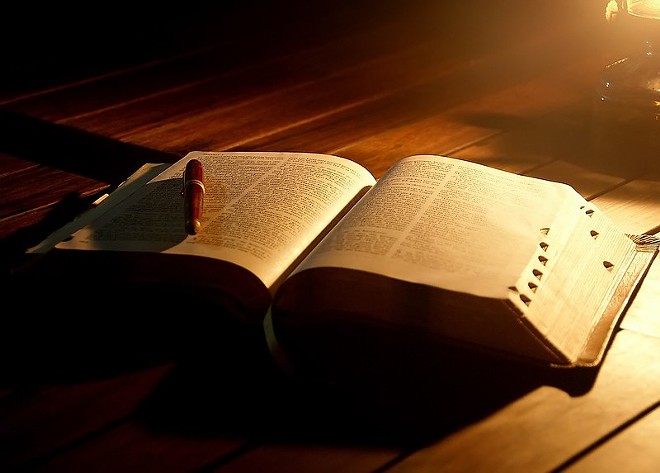 (Editor's note: Yes, this is a work of satire.)

During a contentious meeting last night, the local school board voted to ban the Bible due to its themes of lust, adultery, homosexuality, and socialism.

The move comes amid a growing revolt by parents, who believe our schools have turned into cesspools of indoctrination and indecency. Raucous mobs have appeared at board meetings to push bans on everything from cartoon mice to controversial lessons on whether America may or may not have once behaved unpleasantly toward its Black citizens.

Meanwhile, states like Iowa want to install cameras in classrooms, while Virginia has created a hotline for parents to report unsavory ideas. Yet last night’s meeting would raise the stakes.

It began innocently with parents offering thoughtful suggestions for improving learning. One mother insisted the district stop teaching math, since it was invented by the Greeks, who also invented the Olympics, which are causing her to miss “Chicago Fire.” An angry father demanded that teachers work weekends so he could get free babysitting. “Do your job!” he shouted to applause from the crowd.

The board politely thanked them for their contributions.

Yet the evening’s tenor would soon turn dark when Bobbi Jo Smithson rose to speak. She’s the president of Someone Heard Something Somewhere, a parent group pressuring the district to base its curriculum on rumor, rather than the discredited concept of fact. Smithson had heard that the Bible, a once-beloved text, was littered with talk of “incest, bestiality, and homos.”

“What kind of sicko even writes a book like that?” she asked the board as a restive crowd roared with chants of “Lock him up! Lock him up!”

Board President Bill Donohue tried to soothe the assembly, explaining that the district offers no instruction on the Bible, since federal law bars the teaching of religion in public schools. His words were met with shouts of “Fake!” and “Liar!” One father rushed the dias, attempting to make a citizen’s arrest before being tackled by police.

The mood would further darken when Mary Johnson took the lectern, dressed in Kevlar vest and full fatigues. She heads Not on My Watch, a military cosplay group that’s waging war against remote learning. The group argues that at-home schooling forces parents to become involved in their child’s education against their will, violating their Constitutional rights.

Johnson had heard the Bible includes socialist themes like banning bankers from temples and barring job creators from Heaven. “Why are you trying to ruin the economy?” she castigated the board.

Again Donohue attempted to mollify the crowd. He proposed a new K-12 course to counterbalance the socialism that wasn’t being taught. Children would spend a week studying the KeyBank employee handbook, learning valuable lessons on capitalism and the dos and don’ts of professional attire.

“Nice try!” yelled one parent, noting that the handbook likely contained a section on diversity. Donohue was pelted with juice boxes and forced to flee under police escort.
The fiercest anger would be ignited by Little Suzy McNamara, president of the Conservative Students Alliance. She noted that the Bible contained 50 verses about floods. This was proof of the district’s “secret climate change agenda.”

Yet the crowd would quickly turn on her when she complained of being traumatized by active shooter drills. The Bible’s themes of violence — including infanticide and murder – only exacerbated students’ sense of dread and anxiety, she whined.

“Grow a pair!” crowed one father to peals of laughter. The high school sophomore ran crying from the room as parents heckled her into silence.

Calm was only restored when leading citizen Jim Branson rose to speak. He’s the CEO of Freedom Payday Lenders, the city’s largest employer. Branson is widely looked to as a guiding voice on municipal affairs. He wouldn’t disappoint.

He proposed the district simply remove all offending curriculum, replacing it with eight hours of gym each day. Teachers could then be fired in bulk, allowing for steep tax cuts. “Our kids will be protected from ideas,” Branson asserted, “while learning valuable, real-life lessons, like how to pick on the weird kids in dodgeball.” These were exactly the kind of skills “our children need if they ever want to pledge a fraternity,” he added.

A brief silence settled over the meeting. Then a slow-clap began, building in crescendo until the room burst in rapture.

It seemed as if a cloud had lifted. Through reasoned debate, parents had finally produced a solution everyone could live with. Despite its crumbling reputation, they realized that democracy could still work — if kept in the right hands.

After the applause eventually died, Branson asked the assembled to bow in silence as he led them in the Lord’s Prayer. Then everyone went serenely into the night.