Second Volume of 'Apama: The Undiscovered Animal' Gets Kickstarter Treatment 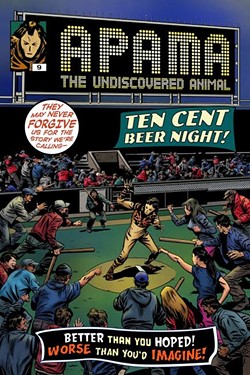 With more than a week to go, Ted Sikora’s Kickstarter for his second volume of Apama: The Undiscovered Animal has nearly reached its $7,000 goal. Spanning more than 160 pages, Volume 2 collects six complete issues – one more than Volume 1.

Apama (AKA Ilyia Zjarsky, an ice cream truck driver turned super hero) originally appeared in Sikora’s award-winning, feature-length independent film, Hero Tomorrow. It is available as part of the rewards on Blu-ray (The 2015 Cut) or DVD (original). The rewards also include Volume 1 and a new T-shirt featuring Apama in all his iconic glory.

Apama Volume 2 is co-written by Sikora and Milo Miller. Sikora also adds the colors and lettering, and Benito Gallego draws the comic. Based in Cleveland, Apama features plenty of references to Sikora’s hometown. Issue 9 is titled “Ten Cent Beer Night.”

Volume 2 features the debut of the Tap Dance Killer, a female anti-hero, in issues 10 and 11, featuring a “Vaudeville Horror Show Musical.” A real show, a new cast recording is available on CD or as a digital download as part of the Kickstarter Rewards.

“Volume 1 is still available and will be packaged as an option for those who didn’t get on board this first time around,” Sikora explains. “The Volume 2 collection will feature issues 6 to 11. New villains are introduced. The Helltown nemesis, Regina, will be back for more psychedelic mayhem. And of course, the ongoing continual nod to Cleveland will be ever present — not only in terms of featuring key locations and recognizable landmarks, but also in referencing local history.”

Even after the initial goal is reached, contributions are still welcome, and will be used to continue the project in bigger and better ways.