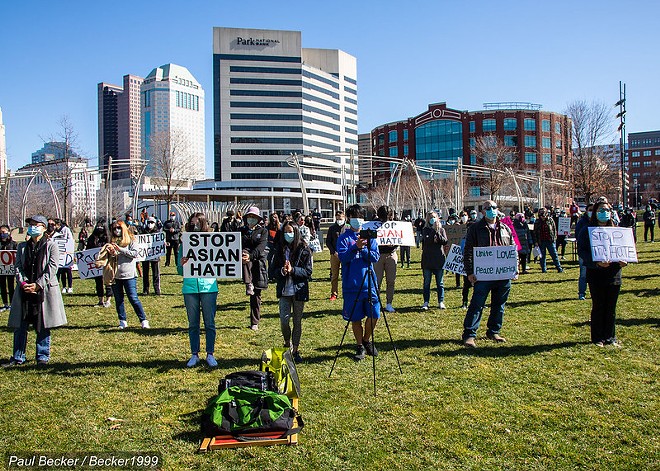 Xuan is the co-director of OPAWL, a feminist grassroots group of Asians, Asian Americans and Pacific Islanders in Ohio. She’s one of several Asian American leaders in the Cleveland area who’ve been sounding the alarm on anti-Asian discrimination for years.

For Xuan and many Asian Americans, the deadly events of March 13 felt like an inevitable culmination of increased anti-Asian hate and violence amid the coronavirus pandemic. While discrimination against Asians in America is nothing new, scapegoating and racialization of the coronavirus made Asian Americans prominent targets in the past year.

In Cleveland, AsiaTown small businesses have faced outsized economic hardships intensified by anti-Asian coronavirus stigma and systemic barriers to resources. Restaurants like LJ Shanghai were harrassed with racist and xenophobic phone calls. An AsiaTown community organizer was verbally attacked and shunned on the RTA.

Amid grief, anger, fear and sorrow, Asian American leaders and advocates mobilize to support their communities. Asian Americans and allies gathered virtually and in person for vigils last week. And on Sunday at 1 p.m., they’ll rally and march in AsiaTown.

Scene spoke with seven Asian American activists and organizers in Cleveland about how they’ve reacted and responded to the Atlanta tragedy and anti-Asian hate during the pandemic. These interviews have been edited for length and clarity.

In the last four or so years of my career, I've been able to gain a little bit more voice, a little bit more internal strength and agency as an Asian American woman. So with the shootings or even the past year, I feel like someone has put a mask on my face that I don't want to be there.

On top of that, we're here in service to the community through our work, so there hasn't been a lot of time to pause. We organized an emergency meeting with the AsiaTown Advisory Committee last Thursday to process our feelings and thoughts and try to move into the next step. It was very clear from that conversation that having our voice heard, whether through advocacy or through a rally was really important. It was further confirmed when Xinyuan Cui, our AsiaTown community organizer, put out a survey on WeChat and over 100 people responded. "Hear our voice. Recognize us. We want to be seen," was a call from the residents. That's why we decided to jump into planning.

A rally or march cannot be an all-encompassing event. This is really a starting point. The long-term discussion is really that we need to dismantle the structures that have imposed these things on our community. We’re talking about racism and xenophobia. It's about dismantling white supremacy. It's not about white people, it's about the structures that cast non-white people as less than.

After a tragedy like the mass shooting, people's instinct is to react right away and to want to see something right away. We were hearing we should have done a rally earlier last weekend, but the reality is planning an event like this takes time. All of us, too, are grieving and mourning and processing in our own ways. To be doing all of that at once is a lot.

Our goal is to really center Asian voices, particularly Asian women, and to stand with our community, to show them that this is our home and that they're not in it alone and the people are here to stand with them and speak up for them. And ultimately it really highlights the need to call for more action.

Every person can speak out against jokes or language that is actually very harmful to Asians. People can also stand up by taking bystander intervention training. I've heard over and over from people experiencing harassment and attacks that the thing that was even more painful was that people around them didn't speak up and just watched. I had an incident in the last year and thankfully there was a mailman who intervened. He said, "Hey, that's not okay, what's your problem," and then checked in with me afterward and that was so meaningful. And of course, supporting Asian-owned businesses.

I think the shooting really brought it home for many people, because they've been feeling this tension since the pandemic, and they've been hearing about all the violent crime, mostly against our elders. Innocent people were just shot at their place of business, even customers. And that could be anyone in our community. Something like that could happen anywhere to any of us at any moment. There's a lot of fear in the community, a lot of people who are feeling very emotional. They're just tired of the hate.

We're hoping that efforts to help the community don't end with just this event. We're hoping that there'll be continual changes in the future to prevent divisive language from our leaders, reduce systemic racism overall and eliminate hate in general. I would like to see government agencies, or any agency or organization that deals with the public, have multilingual staff to address the entire community, more accessible programs for Asian businesses. We’re hoping that the Cleveland City Council resolution condemning anti-Asian racism will be implemented fully.

It's comforting to have this community, where we can collectively grieve and collectively process. It's just been really hard, the pressure to respond. You're trying to respond with all these different strategies and care for people while you're still hurting so much.

Later in the week, I was feeling more clarity on just how important our work is. We've been trying to call attention and talk about what's needed for so long. I have more clarity about the importance of the work we do, the importance of being able to organize ourselves as AAPIs so that we can move together at the speed of trust. In a crisis situation, the level of trust that you have with people is so important.

We have been getting a lot of support from Black organizers who have a lot of experience planning protests and marches. That's been incredibly helpful getting their checklists of things we need to be thinking about, getting examples of different chants that we can use with the crowd. And people have been just reaching out, asking how they can help. For the most part, there's been a lot of support.

Asian women are at a special intersection of fetishization and sexual violence. That ties a lot into what happened in Atlanta because the perpetrator said he was trying to rid himself of temptation – the conflation of Asian women as being some super creation of this exotic sexuality that would cause him to do such harm that he needed to literally kill people.

That's why it really hit home with me. The victims were not necessarily sex workers, but the anti-sex worker sentiment is so deeply tied into the way that they were point-blank murdered. This is a time to help illuminate the reasons why sex workers, and especially migrant sex workers, have to live with such fear. The criminalization of sex work is so detrimental and the stigma associated with even legal sex work is just deadly and just makes people's lives really painful and hard sometimes.

I'm in the process of talking to some other sex workers about potentially forming a Sex Workers Outreach Project chapter or some other sort of local-based sex work outreach. It’s really just about building that community and that ability for people to connect with each other and uplift and empower each other.

We've all felt a lot of pressure to act and to acknowledge that finally, eyes are on us. Finally, the AAPI community has attention and maybe we can leverage that. But we also felt exhausted and we’re still reeling, and we didn't know what to think. We felt like it was unfair to be forced to act and put something together really quickly and not give ourselves time to properly plan and grieve.

I hope that the attendees at the march start to see the diversity in Asian Americans and they get a sense of their traditions and songs or even their language. I hope that there's a bit of that learning and exposure that happens and recognizing the differences within the Asian community. We're not a monolith. There's an incredible amount of diversity just within the Asian American community and that makes us have different needs and resources and outcomes.

I’ve always had a sense of hope that if everybody just were able to hear us and hear our stories and understand our history, they would stop behaving in a way that hurt us.

There's a sense of resentment that we have to capitalize on our trauma for people to see us for just scraps of visibility. We shouldn't have to be killed to be seen. But I felt hope last week because there was a real outpouring of allyship and solidarity. We have all together been working very hard to fight oppressive systems and really advocate for all our communities at large here in Northeast Ohio to make sure that we have the resources we need for our communities to flourish.