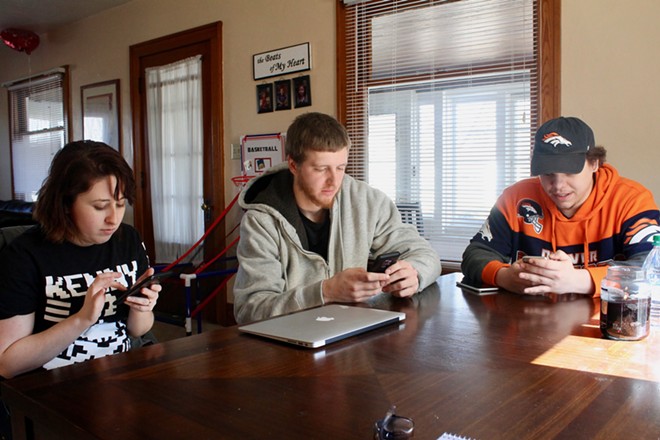 The DAP crew at the Mundy's house in Fremont, OH/ Photo by Mark Oprea

Ohio law enforcement agencies have escalated their warnings to Dads Against Predators, a local amateur predator catcher group that targets men who try to meet up with minors for sex, films the encounters and posts the videos to YouTube.

“Local law enforcement agencies and prosecutors of Sandusky County and the City of Fremont cannot and will not sit back anymore and watch as DAP continues to parade its form of vigilante justice,” the letter from the Sandusky County Sheriff and Sandusky County Prosecutor's Office read. “Its intentions may be well-intended, but their methods and outcomes are improper and unacceptable. The ‘exposed’ individuals may be exactly what DAP says they are, but they also may not be. DAP’s careless and reckless regard for law and order and due process has resulted in the loss of life, and the situation has gotten out of hand.”

Authorities warned DAP to immediately stop or face possible prosecution, though it wasn't clear under what laws.

The dire warning comes after at least two and possibly three men targeted by DAP committed suicide after the videos were posted to the internet.

While amateur predator groups enjoy tens of thousands and in some cases hundreds of thousands of views online and some community support, their brand of vigilante justice in the face of what they see as lax police response to the issue has drawn considerable contempt and caution from police departments. Notably, law enforcement warns there's a danger both to the people behind the camera and in front of it, and that their videos can't be used as evidence to apprehend the alleged culprits under Ohio statutes.

Dads Against Predators, based in Fremont, was one of two groups featured in a Scene cover story earlier this year that examined the rise of online catch groups, the pitfalls that await, and the tension between them and authorities.

At the time, there had already been one suicide death. Asked about the deadly result of one of catches, DAP member Joshua Mundy told Scene: “I guess I just feel like a soldier. That he was a bad guy on the other team. I mean, think of how many lives he potentially ruined.”

As far as facing prosecution, Mundy this week told the local ABC affiliate: "To prosecute, you have to be doing something illegal. So, that's implying I've been doing something illegal this whole time and they haven't prosecuted me. I don't consider myself doing anything different than filming a car accident and posting it on YouTube. In Ohio, I have the right to film anything I want. It doesn't matter what a third party says. They chose to come to meet me."