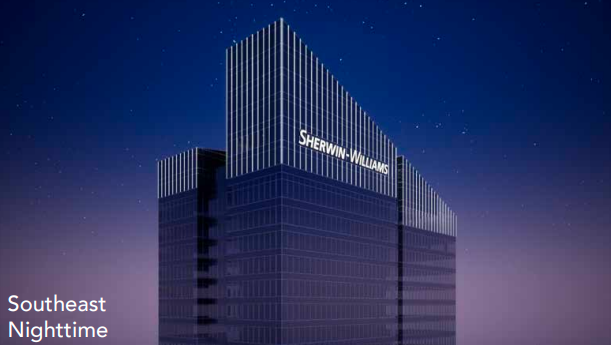 
The City of Cleveland Planning Commission and Landmarks Commission approved exterior designs for the Sherwin-Williams skyscraper on Public Square Friday. The 36-story building, which should begin visibly rising on what were recently surface parking lots west of the Square within the next two months, will be the fourth-tallest structure in Cleveland when it's completed in 2024. The city commissions gave their thumbs up to include the "Sherwin-Williams" corporate wordmark on top.

Sherwin-Williams officials and their design team also presented plans for signage throughout the corporate headquarters site, which includes not only the main tower, but a two-story corporate education center and a parking garage.  The design for the street level signs preferred by the commissions were those backed by fanning paint color chips (see image below).

The Friday meetings followed presentations on Thursday to the Downtown Flats Design Review Committee, which asked Sherwin-Williams to revise their landscaping and amenities plan.

The Sherwin-Williams team removed that portion of its presentation Friday and told the commissions they would return with an updated proposal for the grounds. Plans initially included an elaborate floral schedule, but no benches. One public commenter at Friday's meeting noted the absence of the benches and advocated for them, especially as the grounds would likely make for a popular lunch spot so close to Public Square.

As the amenity details are ironed out, construction will continue. Ken Prendergast at NEO Trans has consistently monitored the site's progress, and reported last week that cranes would arrive in August to begin cement work on the tower.

And as local attention remains focused on the development of the downtown HQ and the company's research and development facility in Brecksville, workers at Sherwin-Williams' Bedford Heights aerosol plant are now back at work after a strike earlier this year.

Roughly 55 workers participated in a strike from early February to mid-April after they had worked without a contract since November, 2021. Workers were asking for additional staff, modest wage increases and additional enhancements to their benefits package. After weeks of failed negotiations, the workers went on strike.

“All we are asking for is a fair and just contract that keeps up with inflation and provides economic sustainability and security for our members,” said Local 1491 president Terrell Williams, in a February news release.

A contract was eventually agreed upon in mid-April and ratified by members of United Steel Workers Local 14919 on April 16. They returned to work April 18, manufacturing the aerosol cans for various Sherwin-Williams products.

Patrick Gallagher, the Director of the local USW Sub District, told Scene that workers managed to secure wage increases and some additional benefits and pension considerations in their new contract. As for the $600 million that Sherwin-Williams is spending on its new facilities, Gallagher said the juxtaposition was obvious.

"We're glad to see Sherwin-Williams investing in downtown Cleveland," he said, "but we believe a company that can spend that kind of money on a corporate headquarters and a research and development facility in Brecksville should invest in the workers who helped them make all that profit."