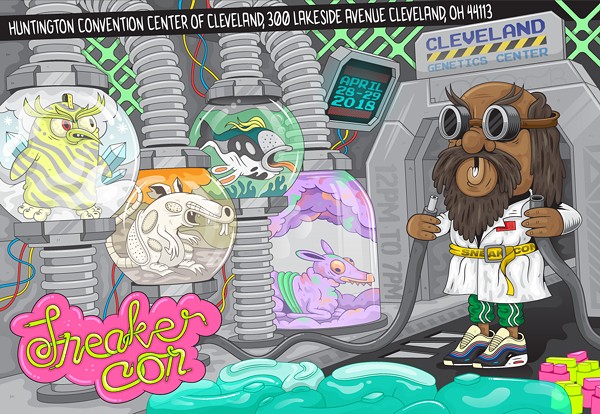 sneakercon.com
If you're looking for the latest Yeezy's or that elusive pair of LeBron XV/Kith collaboration, look no further than Sneaker Con. Billed as "The Greatest Sneaker Show on Earth," the event is designed to cause sneakerheads of all kinds to salivate all over themselves.

With over 300 vendors and more than 150,000 pairs of sneakers on site, pretty much every hard-to-find sneaker will be available at Huntington Convention Center of Cleveland Saturday, April 28, through Sunday, April 29.

While deals are possible to find at the convention, the most rare and popular sneakers can sell for thousands of dollars, especially shoes that are sold out everywhere else. Expect to find the recently-released Nike Wotherspoon Air Max 97/1, reselling for over $600, fashion brand Off-White's collaboration with Nike, which has now released over ten different sneakers and can re-sell for over $2,000 and Kanye West's Adidas collab, the Wave Runner 700, which is going for around $400 to $500.

In addition to all of the vendors, you'll find YouTube sneaker stars signing autographs and posing with fans. There's also "the Pit," an area where anyone can bring sneakers to trade and/or sell with other sneakerheads.

Sneaker Con has come to Cleveland multiple times in the past and this will be the second year in a row it's been at the Convention Center. The event started in 2009 as a single day event in New York City. Now, as sneaker culture continues to thrive worldwide, the founders bring their show on the road to places like Cleveland, Chicago and Los Angeles and even international cities like Montreal and London.

The event will start at noon on both days and go until 7 p.m. You can purchase a single-day ticket for $25 here or a two-day pass for $40.