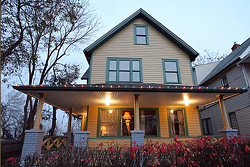 Courtesy the Christmas Story House
The third installment in the series, "Someone Who Just Moved Here Reviews the Things You Regularly Do."

At first I thought that Cleveland was just really into leg lamps. I understood the obsession – fishnets are sexy, the yellow lampshade creates its own golden Instagram filter, and the fringe is fun to run your fingers through when you’re sitting around drinking wine with your cat.

I mentioned the odd prominence of leg lamps to local friends and they were aghast: Didn’t I understand? Those leg lamps aren’t just ways of illuminating one’s home in an amusing fashion. They are a tribute, a sign of local pride, a beacon letting everyone know that Cleveland is the home of A Christmas Story.

I went to visit the A Christmas Story house one balmy Tuesday in April. I admit I only went because I had friends visiting from out of town who wanted nothing else from Cleveland than for it to reveal the secrets of A Christmas Story. Spoiler alert: the snow in the exterior shots was actually potato flakes. End of secrets.

We parked and ran up the porch to the A Christmas Story house and excitedly tugged on the doorknob in vain and were disappointed that it was locked and only then bothered to read one of the dozens of signs placed around the property telling us to first go to the gift shop. Now the gift shop is no joke – it is thousands of square feet of every iteration of A Christmas Story merchandise you could ever want. Every frame of the film is memorialized in the form of Christmas ornaments, magnets, buttons, lip balm, coffee mugs, t-shirts, “sexy” Halloween costumes, candy, plush toys, wall art, or decorative statuary. When they run out of scenes in A Christmas Story, they start in on other Christmas movies. I left without buying anything and the effort gave me a slight headache.

I spent 3 hours at this place and, after reviewing all of the replicas and museum artifacts, I have concluded that I barely understand what is going on here other than a prolonged campaign to make the lives of those at Rowley and 11th miserable for the entire holiday season. But the neighbors are leaning in. A home next door advertised “$10 A Christmas Story house parking” on a big plywood sign. I pointed it out to our tour guide who sighed, “They make more money than I do.”

Pro-tip: The bar across the street, the Rowley Inn, might be the most perfect dive bar in existence.

Rating: 5 out of 5 “A Christmas Story Deluxe Bunny Suit Pajamas From Aunt Clara,” currently on sale for $59.99