Someone Who Just Moved Here Reviews Cleveland Things: Brunch at Townhall With the Kids 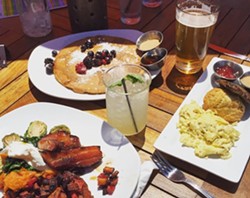 Instagram, @Rebekahjoyful
Townhall is located in the heart of Ohio City. Its large interior is decorated with exposed brick, reclaimed wood, cement floors, a huge bar displaying every possible delicious thing you could ever want to drink, flat screen TVs in every corner, an enormous patio, and restroom stalls so large you could lay down in them. It is, in short, the perfect place to get faced on a weekend evening. It also, unexpectedly, the perfect place to bring your young children to on a Saturday or Sunday morning so you can enjoy brunch together while feeling the painful pull of nostalgia for the days when you used to hang out in trendy bars late at night and make out with a stranger who you only remember the next morning because your shirt still smells like Drakkar Noir.

But you are a parent now, and you don’t stay out late. And when you are able to secure a babysitter, you’re sure to be back home by 10:30PM because your babysitter is affordable and trustworthy and gets real annoyed if you keep her out late/drunk drive her home. You also have to consider your toddler who, regardless of how much joie de vivre/shots you experienced the night before, will wake you up at 6:30AM by yelling crying out with great excitement and force, as though he just solved an impossible quantum physics equation, “PANCAKES!!!!”

You wake up, it is early, your child wants pancakes, you are not hung over, but you would like to remember those years when you were. So you take yourself and your spouse and your child to Townhall for pancakes and some light day drinking to prove to yourselves that you are still human and that 9AM can be just as much fun as 9PM if you lie to yourself hard enough.

You can walk in the doors of Townhall when they open for brunch right at 9AM and they seat you immediately, because you are the only people there besides the hung over wait staff who are gathered around corner tables, rolling silverware as gently as possible so as not to make a single sound.

Townhall is well aware of its appeal to parents and they are prepared. The hostess immediately presents your child with a small coloring book, crayons, a temporary tattoo, a small toy, and A BALLOON. A balloon is the toddler equivalent of a new episode of Game of Thrones – they’re happy as shit and you’re not going to see them for the next hour.

The menu is shocking: in addition to normal, heavy, brunch fare they offer paleo, vegetarian, vegan, and gluten-free options. Literally every type of white person can eat here. But brunch is really all about beverages – for an ideal brunch, everyone should have at least four drinks going at the same time: coffee, water, juice, and the alcohol of your choice. Townhall has a huge fresh juice menu, which means you can experience the satisfaction of tricking your child into drinking kale.

Brunch at Townhall is a party – a party where your toddler drinks $15 worth of turmeric kale juice and cries when his balloon floats up to the ceiling for sixth time because you refuse to get it down this time and you warned him not to let go of it again, you really did... but a party nonetheless.

Pro-tip: Order the vegan cauliflower tabbouleh and a side of bacon. The two dishes cancel each other out and it’s like you ate nothing at all.

Rating: 5 out of 5 “Another mimosa? I really shouldn’t –but, there’s a playground nearby, right? Honey, can you play on a playground while mommy waits out her buzz? Yes? THEN YES.”