Spirits, Monsters and Magic — Great Lakes Theater Has a Fierce and Fun 'Tempest' 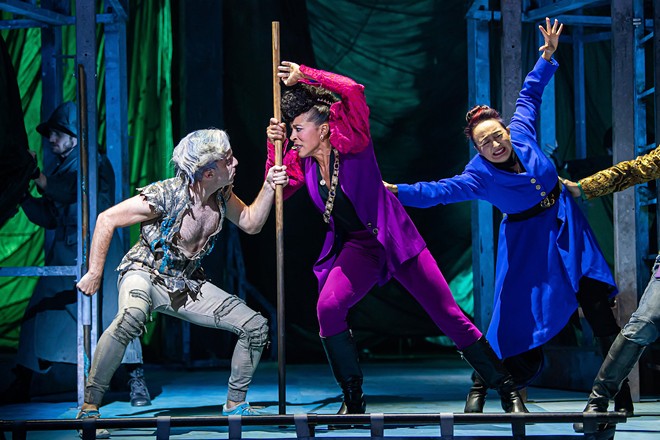 Photo by Ken Blaze
The Tempest, now on stage at Great Lakes Theater

One of the favorite tropes of The New Yorker magazine are cartoons with one or two survivors on a tiny desert island, usually with a single, lonely palm tree sticking out of the sand. There is something compelling about the idea of being stranded, far away from the rest of the world, and William Shakespeare knew it a long time ago when he wrote The Tempest. It's a play full of playfulness, some music, and a happy ending for all.

Aging Prospero and his teenage daughter Miranda have been banished to an island where only a spirit named Ariel and a monster, Caliban, are hanging out. And to make matters worse, those four are all in various states of being pissed-off. Prospero himself was exiled after being ousted as the Duke of Milan by his scheming brother Antonio.

Meanwhile his coming-of-age daughter Miranda, feeling frisky, is stuck on a rock with only daddy for company, Ariel wants his ethereal self to be set free, and Caliban (a real son-of-a-witch) seethes because he claims he's the rightful owner of the island which was given to him by his mom. But they can't do much about their various frustrations since Prospero can use magical powers, provided by his cloak and his collection of books, to induce sleep, inflict pain, and mess around with the forces of nature as he desires.

Hot for taking revenge on his enemies, Prospero sends Ariel out to whip up a storm and wreck a ship that's passing by on its way to Italy. The passengers on that vessel just happen to include Antonio (David Anthony Smith); Alonso, the Queen of Naples (Jessika D. Williams), and her counselor Gonzalo (Lisa Tejero). Of course Ariel does his master's bidding and all of Prospero's persecutors are neatly dump onto his turf.

But Prospero's revenge plans go pear-shaped as Miranda meets Alonso's studly son Ferdinand, who has wandered from the beach and away from the other survivors. The two young folks lock eyes, and that's clearly not all they have in mind. That's just the beginning of the complications until everything is resolved with remarkably few dead bodies, especially given old Will's usual headcount when revenge is on the menu.

In this lively production at the Great Lakes Theater, director Sara Bruner grabs this material by the neck, flips a few genders, and cooks up a delicious story that is elevated by bits of music, dance and a few outstanding performances

Standouts in the outstanding cast include Joe Wegner's Ariel, leaping around like a teenager who chugged a six-pack of Redline Xtrreme—twitching, mugging and fully enjoying his ability to mess with people. In the roles of love-struck Miranda and Ferdinand, Angela Utrera and Domonique Champion create some genuine sparks as they do the hormone tango with each other.

Nick Steen makes his Caliban into a compelling but empathetic monster, without the overdone makeup tricks that are frequently employed for this character. And as Trinculo and Staphano, drunken sailors from the ship, Jodi Dominick and Jillian Kates swallow more than they spill as they woozily join forces with the grateful, foot-licking Caliban.

In the central role of Prospero, Aled Davies invests the character with an air of fierce resignation, showing how his desire for revenge morphs into compassion and mercy, finally setting aside his cloak and his magical powers to regain his rightful role as Duke.

To some, Prospero's arc in this play mirrors the playwright's own imminent departure from his own "island" of theatrical activity. In any case, this Tempest succeeds in leaving the audience well satisfied and thoroughly entertained, even though the scenic design is a mixed bag. The stage is dominated by large swaths of parachute fabric which looks stunning during the storm scenes and at a few other times. But in calmer moments, those folds of fabric it just look like a lot of gray laundry somebody needs to iron.

As we slowly emerge from our own pandemic tempest, we can be grateful that we still have connections to the bard. Thanks to GLT, the Ohio Shakespeare Festival, the Cleveland Play House /CWRU MFA program (where Twelfth Night is in production until Oct. 23), and the Cleveland Shakespeare Festival, we can once again experience the magnificent words of old Will in live performances. That is no small thing.