Steve Gleydura Out as Editor of Cleveland Magazine After 17 Years

Twitter.com / @CLE_Steve
Steve Gleydura is no longer the editor of Cleveland Magazine. After more than 17 years in the publication's top editorial role, Gleydura and the leadership at Great Lakes Publishing agreed to a "mutual parting of ways" last month, Gleydura said. His last day was January 17.

"It felt like this was the right time," Gleydura told Scene in a phone conversation Friday. "We had a really good past year. Jimmy [Bigley] won writer of the year at the [City and Regional Magazine Association Awards], and the writers have been doing amazing work. I felt like it was a good time to go out on a high note."

That high note surely included his induction into the Press Club of Cleveland's Journalism Hall of Fame last fall. Gleydura joked that the award was kind of a hint. "You can only stay in creative positions like these for so long," he said.

A Youngstown native, Gleydura arrived at Great Lakes Publishing in 1999 after three years at the Lorain Morning Journal. He worked briefly at the defunct Northern Ohio Live and Inside Business before joining Cleveland Magazine. Among other things, he oversaw the publication's digital growth, which included a new website in 2016.

He said he felt fortunate to have worked for a magazine that valued longform journalism, especially in an era when the number and vitality of print publications are dwindling. He said he was honored to have worked with so  many talented writers over the years, including his current aces, Sheehan Hannan and Jimmy Bigley; and his rising stars, Dillon Stewart and Lee
McKinstry. 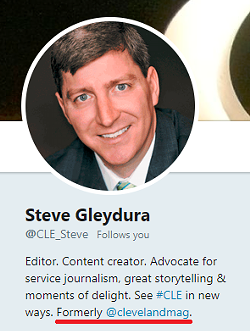 As for his personal stamp, Gleydura said he made it a priority to elevate service journalism — Best Doctors, Best Suburbs and the like — to the same level of editorial rigor and investment as feature journalism. He said this was a deliberate strategy to earn readers' trust.

Gleydura said that there hadn't been tension behind the scenes between him and publisher Lute Harmon, Jr., (son of founder Lute Harmon, Sr.) and that in fact he and Harmon had always gotten along, having worked together at Inside Business.

"I love the magazine so much and wish all the best for everyone there," Gleydura said. "This was really just a question of timing. It was the right time."

Gleydura is uncertain what's next for him professionally, but said that in a rapidly changing media landscape he expects there will be opportunities for him to lend his editing and content management expertise. For now, Cleveland Magazine's veteran managing editor Kim Schneider is serving as interim editor in chief, though Gleydura expects Great Lakes Publishing to conduct an official search for his replacement.