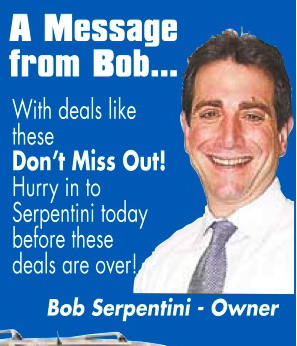 Bob Serpentini, Mr. American And Proud of It, is apparently so American that he’s in danger of defaulting on millions of dollars in loans provided by GMAC financial services to his Aurora dealership. Defaulting on loans, after all, is the new cool thing to do in this country, especially when corporations are being handed fat bailouts ever other week. Strangely, though, Serpentini doesn’t seem to be cutting back on expenses — his slick mug is all over tube and getting the Winterhurst rink in Lakewood Serpentini Arena couldn't have been free.

Managers at Serpentini’s dealerships told Scene that they’re still selling cars. But a spokesperson for GMAC says the company will no longer loan Serpentini the cash he needs to put more cars on his lots. “The Aurora location is in dealership default,” explains Sue Mallino; GMAC auditors are currently keeping tabs on the books there. “Typically, we provide companies with three months to sell off their inventory, pay back the money, or sell the store. We’re working with this dealer to give him more time to get through his financial difficulties. In the meantime, we’re overseeing the inventory.” GMAC is also still providing loans to customers looking to finance purchases at the dealerships.

What of the other three stores, in Strongsville, Tallmadge and Orville? Other lenders such as Key Bank finance the cars at those dealerships. Key Bank reps would not comment on record.

Of course, Serpentini could always sell off his share of Rattlesnake Island, the private club he oversees on Lake Erie (a quasi-socialist utopia staffed with young Russian women on student visas). And just for fun, here's a little background on Mr. American's politics, which suggest that anything even sounding like "bailout" would offend his deeply patriotic sensibilities. — James Renner