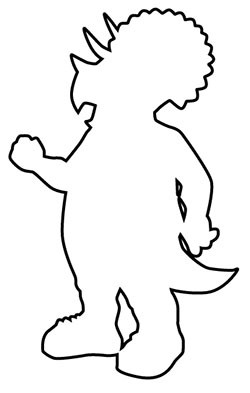 Word from the communications desk at Tri-C is that the college is actively designing a costumed mascot to "tromp around at campus and community events."

The mascot needs a name, of course, and Tri-C is inviting the community to help make this all-important selection. As the local outlet following mascot developments of every sort, we are here to promote the vote. Voting closes on Friday, so pick one of the following five names at this link as soon as possible.)

Descriptions below provided by Tri-C.

(Following the success of "Gritty" in Philadelphia, we're partial to Tricky, a name which evidently "lends itself to a number of potential signature moves." (!!!) Tricky the Trike's got a nice ring.)

We also note — as a word of caution? — that the above outline bears a striking resemblance to Barney's Baby Bop.)

STOMP:
Stomp conjures the impression of a large, prehistoric animal’s footfalls in a primeval forest, and it commands notice. It’s easy and fun to say, especially for children, and it could also lend the mascot a signature move.

SPIKEY:
The name Spikey refers to the three horns — one on the nose, two on top of the head — that are the triceratops’ namesake. Plucky and spry, Spikey is up for any challenge, but don’t poke the Triceratops. Spikey didn’t get the name for no reason.

TANK:
Big. Powerful. Imposing. If you are the enemy, a fierce, frightening weapon of war that can master any terrain; if you are not the enemy, probably the safest place to be. A tank’s defining feature is its durability.

TRICKY:
Tricky, like the Triceratops itself, is a pun on Tri-C. Cunning, crafty, sly, wily, the mascot named Tricky is one that comes with a bearing and behavior that can entertain and delight. The names also lends itself to a number of potential signature moves.

TRIKE:
Trike is shorthand for Triceratops, used everywhere from the scientific community to video games. It subliminally suggests “three,” the number of horns on the triceratops, because Trike is also shorthand for tricycle, or any bike on three wheels.