Using data from the Ohio Department of Development and Fortune 500 listings, a report from an Ohio policy thinktank found significant pay disparities between state CEOs and their employees.

The main finding of the study conducted by Policy Matters Ohio showed the median pay of a chief executive officer in 54 of Ohio’s 100 largest employers who reported to the Securities & Exchange Commission was 322 times the rate of the median worker at that same company.

“More than two-thirds of the reporting corporations paid their CEO more than 200 times what they paid typical employees,” author Michael Shields wrote. 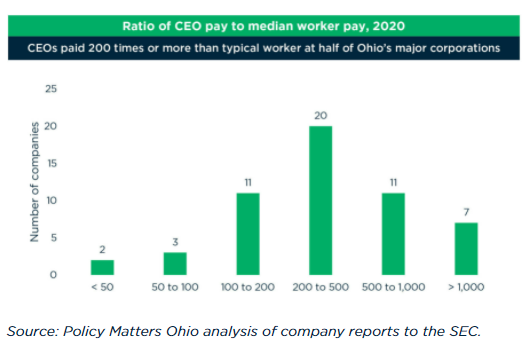 Seven companies were reported as paying the CEO more than 1,000 times more than the median employee wage.

The research used reports from 54 companies because many of the largest employers in the state don’t have to file SEC reports due to their status. Nonprofits such as the Cleveland Clinic, government operations like Wright-Patterson Air Force Base and privately-owned companies like Giant Eagle aren’t required to file such reports.

“The resulting fall in union density has allowed CEOs to further consolidate the power they used to capture a growing share of the income produced over recent decades,” Shields wrote.

Analysis of CEO pay for the 54 employers found an average pay of nearly $16 million, with 50 paid more than $5 million, and 43 seeing more than $10 million. The highest paid in the state was General Electric CEO H. Lawrence Culp, Jr., who netted $73.2 million in 2020, according to the study.

Of the major corporations in the state reporting to the SEC, 15 reported median employee pay of less than $26,500 among the more than 185,000 workers.

“Yet all but four of these companies paid their CEOs at least 100 times what they paid their median worker,” Shields wrote.

Pay in the median employee category also fell 2% in 2020, compared to the year before. The Economic Policy Institute found, however, that overall CEO pay nationally increased by an average of $3.8 million.

Policy Matters found CEO-to-median worker pay ratios “large but slightly less extreme” in the 23 Ohio companies on the Fortune 500 list. Shields found an average CEO pay among those companies to be $12.2 million. Progressive was singled out as the middle-ground for CEO-to-median worker pay ratios, with CEO Tricia Griffith receiving $15.2 million versus the median Progressive worker getting $72,368.

Four of the largest Fortune 500 companies in the state pay their CEOs at least 100 times the median worker pay, the study found, and 12 pay 200 times as much. L Brands, for example, has a pay ratio of 1,873 to 1, and Cincinnati Financial shows a 38 to 1 ratio.

“The fact that CEO pay has far outstripped pay growth for other groups — even other highly paid worker — reflects the unique position of power that CEOs have to set their own pay, not a competitive market for talent,” Policy Matters wrote in its report.

The report recommended using COVID relief dollars from federal aid packages to “provide premium pay to workers who have done critical infrastructure jobs on the frontlines during the COVID-19 pandemic,” among other incentives for companies to raise pay for workers.