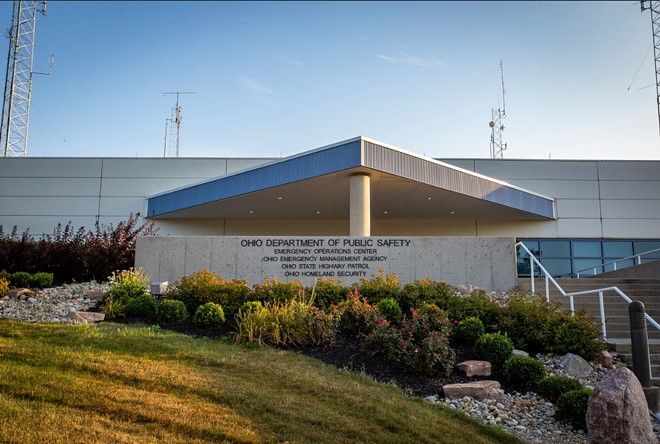 Ohio Emergency Management Agency
Gov. Mike DeWine was getting bombarded with worried calls. A flurry of internet rumors had set the Republican faithful aflame. Ohio, along with the federal government, had supposedly set up secret “FEMA camps” to enforce Covid quarantines, with the draconian goal of instilling thoughtfulness toward others.

So last week, the governor took to the podium to dispel the rumors. No, Ohio had not built FEMA camps, he claimed. Yet survivors of the camps would tell a different story. It seems the horrors are real.

One night, Bob Kettering was sitting in his Zanesville living room, watching his Grand Ole Opry box set on VCR. Suddenly, black-clad government agents burst into his home. Kettering was blindfolded, given a knock-out drug, and shoved into a waiting van. He would awaken to find himself locked away in a Sheraton outside Dayton.

The hotel had been confiscated by the Federal Emergency Management Agency (FEMA), he says. Kettering and his fellow inmates were placed under 24-hour guard. He would soon discover the reason for his abduction. Kettering had been caught on government surveillance cameras entering a United Dairy Farmers without a mask.

The conditions were excruciating. If he didn’t wake early enough, the complimentary breakfast bar would run out of cheese Danish. He’d be forced to eat raspberry instead. The pay-per-view system was loaded with rom-coms, seeming to purposely exclude great auteurs like Willis and Van Damme. Popcorn in the lobby was served without butter.

“I wouldn’t wish this on my worst enemy,” Kettering says.

Fellow inmate Josh McCloskey confirms the atrocities. He’s a senior at Miami University, majoring in business administration. One night he was on his way home from a party. “It was at the Lambda Phi house,” he says, “totally off the chain.” Federal agents grabbed him in the dark.

Instead of attending classes on supply-side economics, he now found himself enduring lectures from the Ohio Department of Health. Social workers led withering workshops on such topics as “Courtesy,” “Kindness to Others,” and “Basic Concepts of Airborne Disease.”

McCloskey says their intentions were clear. “They were trying to take away our freedom.”

Government doctors diagnosed both men with White Man’s Victim Syndrome. It’s a paralyzing condition caused by under-development of the brain, in which Caucasian men feel persecuted despite all evidence to the contrary. As a cure, they were force to attend drum circles led by guys in ponytails.

After 38 days in lockdown, opportunity finally struck. They befriended a woman named Marilyn, who prefers to remain anonymous for fear of retaliation. She’d been kidnapped after hosting an Amway party without social distancing and had managed to smuggle in her Jitterbug flip phone.

The trio made a desperate call to the Trump 2020 campaign, hoping to alert the president to the Deep State conspiracy flaring behind his back. But officials hung up after discovering they weren’t donors.

Fearing all the sensitivity training would eventually make them into French citizens, they finally plotted a desperate escape. They approached a guard at the atrium exit, asking for directions to the “White Privilege” seminar. As the guard began leading them toward a conference room, the trio plunged out the door. An awaiting Uber squired them to safety.

They’re now ensconced in a safe house owned by the Covid Resistance. Life is tough here. Kettering misses the musical stylings of Kitty Wells. McCloskey laments his inability to “rage” with Lambda Phi.

Someday, when the coast is clear, they’ll be taken by underground railway to Florida or Mississippi, where they will once again breathe the mask-free air of liberty.