Cleveland's problem could have been the NFL's. 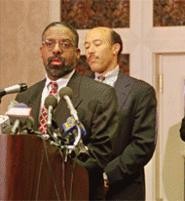 Associated Press
Mike White gave Fred Nance (back left) more than enough money to close his eyes.
The last time we sent a son of Northeast Ohio to the NFL's executive ranks, shopping-mall heir Eddie DeBartolo bought the San Francisco 49ers. He naturally hired a Youngstown mob lawyer, Carmen Policy, to be the team's president. That's how we do things around here.

Fortunately, DeBartolo was surrounded by some of the great minds of football, Bill Walsh and George Seifert. The Niners flourished.

But Eddie wanted to own casinos. And the best way to do that, as any good son of Northeast Ohio knows, is to bribe someone. It's the law.

Alas, Eddie bought off the governor of Louisiana. Elsewhere in the United States, they apparently have rules against such things. Eddie got caught. Then he lost the Niners in a most unseemly war: intra-familial litigation with his sister Denise.

Since then, Denise has naturally run the Niners into the ground. And Carmen bolted for pastures with fewer FBI guys knocking around.

In Cleveland, another good son of Northeast Ohio, Al Lerner, had purchased the expansion Browns. He hired Carmen as president.

Unfortunately, Carmen was like a Beverly Hills maître d', loaded up with good hair and pounds of pretty words, but with a clinical substance deficiency. Without Seifert and Walsh, he quickly assembled the most inept franchise money could buy. Then he got whacked by a guy with even better hair -- Butch Davis.

Given Cleveland's track record -- we won't even mention Art Modell -- it was startling to hear the NFL was considering another son of Northeast Ohio to be its commissioner. Last week, owners elected Roger Goodell the new emperor. Cleveland lawyer Fred Nance was among the finalists.

Those who know Nance describe him as unfailingly bright, gracious, a lawyer's lawyer. He's the chairman of the Greater Cleveland Partnership and managing partner of Squire Sanders & Dempsey, one of the city's largest firms. It's not hard to find people -- at least among the political and executive castes -- to chirp his virtues.

"I have nothing but the utmost respect for him," says Subodh Chandra, Cleveland's former law director and a man not easily impressed. "He's a very good lawyer. There are people out in the legal profession who are overhyped and overrated. Nance doesn't seem to be one of them."

When he worked for the city, Chandra often called Nance for advice, which was provided for free. Others in the business world do the same. Which makes it easy to understand why the high castes don't see the other Fred Nance, the one who served as point man for the fleecing of Cleveland.

In its initial story about Nance's NFL candidacy, The Plain Dealer chronicled his achievements as the city's main man in negotiating construction contracts for Browns Stadium and the Hopkins airport expansion. What it didn't mention was that both projects were rife with corruption that might make even Policy's former clients blush.

Councilman Mike Polensek has tried for years to get an accounting on Browns Stadium. No one really knows where the money went, how much was spent, whether the final cost was $300 million or $500 million. All we know is that Mike White pulled the strings, and Fred Nance did his bidding.

We have better information on Hopkins, but it didn't come from Nance (who did not respond to interview requests). It came from an FBI investigation that revealed the selling of contracts so brazen, they should have listed extortion fees on billboards. In one instance, Nance negotiated with another White buddy, the since convicted Ricardo Teamor, to have Cleveland purchase the I-X Center for $66 million -- twice what the only other bidder, Brook Park, was offering.

The high castes conveniently looked the other way. After all, Nance himself has never been accused of stealing. And a lawyer's job, under the curious rules of said profession, is to zealously pursue a client's interests, irrespective of honor.

Polensek admits that Clevelanders got screwed on the stadium and airport deals. "A lot of people made a lot of money off it," he says. "The taxpayers of Cleveland got the big jar of Vaseline from Sam's Club, you hear me?"

But he doesn't blame Nance. "People tell me who were close to it that Fred did what he was told," says Polensek. "That's why I've never really been mad at Fred. I've never questioned his integrity and his honesty. He took orders well."

It's doubtful Clevelanders see it the same way. When you've been repeatedly mugged -- on the schools, on juvenile centers, on damn near every deal the state does -- you don't buy cute professional codes. All you know is that Nance was at the scene when you got robbed. You're saying he didn't see nothing?

This would be a good time to insert a laugh track.

Of course, Nance was merely following the well-worn path of other connected executives. Making money in real business is so damn hard. Making money off government in Ohio is like finding it on the sidewalk. In real business, they don't spend hundreds of millions on stadiums with no idea where the money went. They don't give $50 million to some low-rent Toledo coin dealer, then never bother to check on their investment.

During White's reign, Squire Sanders pulled in $7.1 million in city business. For that kinda money, you'll close your eyes. It's how we do things around here.

Still, with the FBI snooping around the airport and stadium deals, it's hard to believe the NFL took Nance seriously. You can get away with that stuff in Cleveland, where the media's content to smack drunk drivers and library masturbators, and prosecution is based on your party affiliation.

But the national media hunt big game. The NFL's too smart to hire an Exploding Commissioner.

Please, take Fred Nance. You can afford him more than we can.