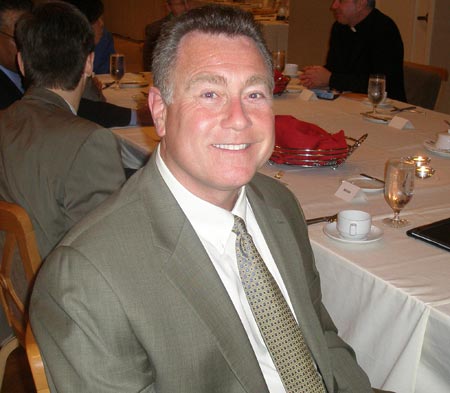 Fans at Friday's Indians game will be treated to fireworks, as they are every Friday, but this time will be a little different. Instead of music, the pyrotechnics will be flying to a soundtrack of the dulcet tones of Tom Hamilton. In honor of Hammy's 20th anniversary in the booth, a compilation of some of his best and most memorable calls will blair through the speakers at The Jake.

Which means a couple of things. First, it's a good time to figure out how many "A's" there are in, "Awaaaaaay back," and how to spell "Ballgame" so it looks like how Hammy says it, in one syllable. And second, we should make sure Hamilton hasn't turned into Harry Doyle up in the booth, sucking away on a fifth of Jack Daniels in just an undershirt while saying, "The post-game show is brought to you by … Christ. I can't find it. To hell with it."

"It's a good thing I don't like Jack," Hamilton chuckles, when asked whether this miserable Tribe season has driven him towards his fictional onscreen counterpart in any way. Watch a team that's used approximately 137 different pitchers already this year, and see if you don't spend the late innings diagramming elaborate ways to impale yourself on a Louisville Slugger.

"It's disappointing,” he admits, “but I know how lucky I am to have a job while thousands are out there looking for jobs. That keeps you motivated. You realize how fortunate you are. You're not always going to have winning years, but this one hurts because of how much was expected. Sometimes you know it's going to be bad. This wasn't one of those years."

So what has kept him from heaving Mike Hegan out the window onto Ben Francisco in the on-deck circle? Hamilton loves the game. Tune in any time — you will never hear a sullen voice.

"I learned so many things from Herb [Score]," he says. “My first year, in 1990, we weren't a very good team, and the club really hadn't been any good since the ’50s. But he said that you can never let how a team is playing impact your performance. You owe it to the listeners. They're not tuning in to hear you moan and groan. Every game is really its own entity."

Score took it to the extreme. As KC Star and Sports Illustrated columnist Joe Posnanski once reminisced: "I had never really thought of it before, but I'm sure that his consistent and optimistic tone had something to do with why people called him ‘No score.’ It wasn't just that he gave the score out less often. If the Indians were losing 12-1 in the eighth, as they sometimes were, his voice never gave it away. There was always a tinge of hope in Herb Score's voice ... until he finally had to come clean and give us the cold and unforgiving numbers. Then people would angrily snap off the radio and think, 'Dammit Herb, I would have turned it off earlier if I had known. Why didn't you give me the score earlier?'"

But I think that's what Hammy is talking about. You can tune into a game and, lord willing, if it's still at least close, get sucked right back into some naive enthusiasm for the Wahoos because Hamilton and Hegan are infectious that way. When you're driving around or grilling or doing some chores, that little sliver of optimist in you could find no better companion than these two.

And while there haven't been many highlights this year — with the exception of finally cutting David Dellucci — there've been plenty since Hamilton stepped into the booth in 1990. Plenty of "Awaaaaay back"s and the rest — lots of aural ammunition for the Friday night honor. "Oh god," he groans in a way that would never make a broadcast. "I've got plenty of publicity. I don't need this, but I'm very thankful and appreciate of what the team's doing."

A note on that homerun call: It's not a catchphrase, per se. But it's memorable, and when the Indians are winning or in contention, it can send a fan right to the edge.

So where did it come from?

"I know it sounds like a copout, but I don't know," Hamilton says. "Anyone that listens to the games knows I don't use the same call every time. I'm a firm believer in that it has to be natural. Plus, you don't want to make it seem like a no-doubter and then it's caught by the shortstop."

No, that was Herb's job, I say, which draws another laugh, the same genuine kind that does find its way on air. And, really, what other reaction can you have to what's transpired on the corner of Carnegie and Ontario. In a lost season, Hamilton's been one of the best reasons to listen to Tribe games, and on Friday, he’ll be one of the best reasons to go to the game. He may not want to hear his own voice, but we certainly do.