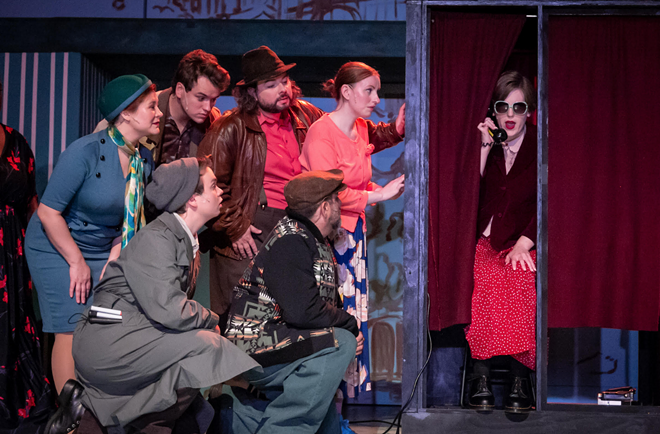 If there's a limit to how much whimsy you can take at one sitting, your tolerance may be stretched to the breaking point with Amelie, the perky musical about a young French woman now being presented by the Mercury Theatre Company in South Euclid. While cutesy elements abound—including a puppet that plays the role of the young Amelie, a globe-trotting garden gnome and a meet-cute for lovers on top of a photo booth in the middle of Paris—the sharp staging and a few superior performances save the day.

Based on the 2001 movie of the same name, this version features music by Daniel Messé, who co-wrote the lyrics with Nathan Tysen, and a book by Craig Lucas. The film was nominated for five Oscars, but none of them were awards for clarity since the storyline spews out many threads but has a hard time following any one of them for long.

Young Amelie is saddled with a distant father Raphael (a mellow Brian Marshall), a doctor who only touches her during his monthly physical examinations, while neurotic mom Amadine (Jennifer Myor) continually reminds her daughter not to get too close to other people. They keep the young girl away from contact with others and even force her to release her pet goldfish (yes, it's named Fluffy) into the Seine for "safety" reasons. Shortly thereafter, Amadine takes Amelie to see Notre Dame and is killed when a tourist jumps from the top of the cathedral and lands on her.

As a result of these various traumas, Amelie grows into a shy young woman who works as a waitress in a cafe. Her world is proscribed by her hesitancy to connect, so other than chats with her co-workers she spends her free time alone in her apartment staring at the sky. That flat is where she finds a small box the previous occupant left behind, containing various childhood items, and she becomes fixated on finding Nino, the owner of that box.

There are many other characters introduced durng the 27 tuneful songs that comprise the show, and 21 of them involve Amelie. In that demanding role, Gracie Keener proves more than equal to the challenge. Far from the gamine of the film, Keener's Amelie is refreshingly downbeat. And she handles her many songs with aplomb, using her excellent voice to great effect in songs such as "Times Are Hard for Dreamers" which expresses her hopes: "It isn't what I have/It's what I have in store that matters now."

She is matched in vocal quality by Benson Anderson, who sings (he barely speaks) the thin role of Nino. He appears several times to trill his innermost thoughts—particularly in "When the Booth Goes Bright" that establishes the photo booth as the point that will bring him and Amelie together. Also, J. Michael Pressimone as the neighbor painter Dufayel trots out a gorgeous, deep voice when he sings "The Girl with the Glass." Also effective are Trey Gilpin as a local poet plus a sparkly turn as Elton John, and Neely Gevaart and Kelvette Beacham as Amelie's pals Gina and Suzanne.

Mercury has gone all out in this production, with a complex set featuring two (almost) spiral staircases and hidden doors that slide, pop open and roll into position throughout the proceedings. Director/choreographer Pierre-Jacques Brault manages all the action with smooth precision and some inventive movement, making the story emerge in spite of the authors various narrative flights that take off in some curious directions.

In one such digression, a young grocer Lucien (Nick Grimsic) sings a ballad "Three Figs" in which he croons to his favorite fig, which he's named Figaro, apparently just for the opportunity to drop a bad pun at the end, "Figaro is blue/There's nothing on his plate/ What's Lucien to do?/He finds the guy a date!" And a garden troll, in which Raphael stores the ashes of his late wife, is hijacked and sent around the world, triggering a puppet troll's song inevitably titled "There's No Place Like Gnome."

Those moments aside, Amelie has a winning quality that leaves you smiling, even if during the middle of the show you're not exactly sure what you're smiling at. But it has a happy ending, and who among us couldn't use one of those right about now?