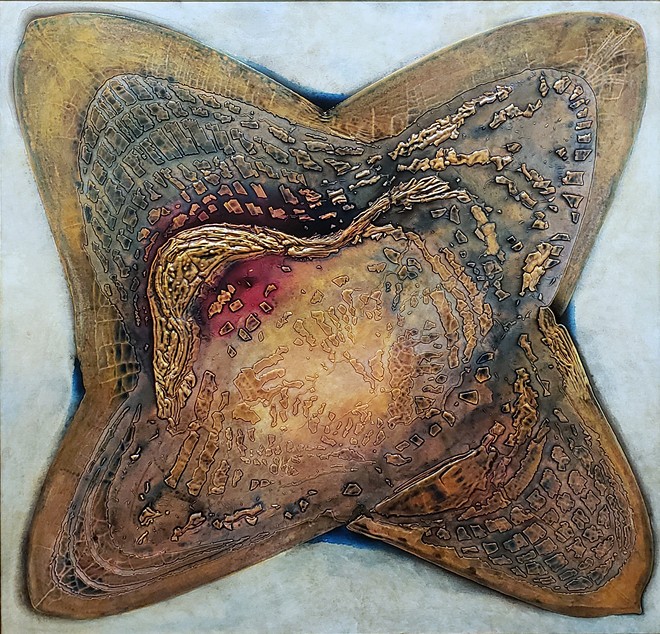 
Starting with a virtual opening on Friday, Feb. 5, the Artists Archive of the Western Reserve ignite 2021 with a two-woman exhibition, “Beyond Surface: Denise Buckley & Kathy Skerritt,” which runs through March 27th.

This is an inaugural show for both Buckley and Skerritt, both newly archived artists, will have works added to the museum’s prestigious 10,000-piece collection of regional art. These two artists have reached mastery of their respective crafts and manipulate materials across surfaces and three dimensional space to elicit and an emotive dialogue with the viewer. From Buckley’s tassels of metal contoured into bodily forms of humans and animals to Skerritt’s geographically and anatomically inspired renderings, both leave a distinctive and impactful imprint on the psyche.

“Kathy’s work is very textured and very process oriented, and at the same time the subject matter of her work is really about how geologic and human organisms operate on a deeper biologic and spiritual level," said AAWR Executive Director, Mindy Tousley. “Denise’s most recent work is like sketching in metal – lines of metal are defining volumetric space, and so she too is working from a skeletal point of view – beyond the surface.”

Buckley is a welder and figurative sculptor. In this exhibition she presents busts of female figures caught in the act of living. Her artful expressions of the human form are complemented by her three dimensional ‘sketches’ of deer welded together with a sense abandonment and compulsion to derive the spirit of these majestic creatures.

When the quarantine began, Buckley spent some time quarantined at her home, originally somewhat annoyed by these gentle creatures who would reach havoc on her garden, before becoming enamored with their presence in her yard where they sauntered up from a nearby ravine. She was enlivened by the inspiration to capture an abstraction of their spirit through the welding process, the result being 7 life-sized, steel deer.

“As I watched them in motion, I felt I could capture their essence in steel," said Buckley. “I had become so engrossed in fabricating a perfectly formed surface that I lost my original intent of drawing in space, sketching with the steel instead of a pen. I played with each piece of rod, bending, and shaping it like a line in space. I left open spaces between the rods and created uneven lines; I was aiming to capture an image of a deer not necessarily a true physical likeness. None are perfect in any sense but together as a unit I believe I have captured their true spirits.”

Buckley attended the Massachusetts College of Art, where she received BFA - sculpture/crafts before attaining her MFA in Sculpture from Syracuse University. She now teaches at Hawken School. She has an extensive list of accolades as an exhibiting artist and has had her work featured in the interior set of several major motions pictures including: “Spiderman,” “Spiderman II,” “Spiderman III” and “Edge of Darkness."

Skerritt has traveled extensively and, observing the globe from airplanes, natural patterns began to emerge to her along the expanses of the planet’s surface and these became instrumental in her treatment of form and surface in her paintings. In her travels all over the word she saw a sense of shared humanity that transcends cultural differences and she meditated on things and people beyond their surfaces to what’s underneath their ‘shells.’

She studied the contours of human anatomy and the similarities between systems in nature and those of the human body. In her artist’s statement she talks about “…exciting visual correspondences between river systems and the circulatory system of the human body, forests and the bronchial tree of the lungs, and among planetary topographies and the organ, skeletal, and fluid systems of the body.”

With Skerritt’s piece “Approaching Rainbow Speed,” the viewer observes a butterfly-like shape speckled with what looks like a topographical map of the earth raising up from the surface like forgotten islands emerging from a lowering tide. The colors are like light refracting through an oil spill mixing with muddy runoff. A hint of iridescence is keenly balanced with rich earth tones ranging from the colors of the sands of the Kalahari Desert to rust reds like the color of dried blood harmoniously blending with cool turquoises and blues like swirling pools of freezing ocean water.

Skerritt attained her BFA from Art from Carnegie-Mellon University and a Masters in Positive Organization Change & Development from Case Western Reserve University. Some of her influences include Gaudi (embellishment of natural forms), Goldsworthy (patterning and transitory states in nature) and, most significantly, the Transcendental Realist artist and Avatar, Adi Da Samraj (simultaneity of the image and the viewer and the practice of self-transcendence in the realization of intrinsic indivisibility).

This is exhibition is a timely one as Skerritt recently closed her Cleveland studio to concentrate on long-standing health challenges but continues to live artfully and with an eye always towards the beautiful, the evocative, and the beyond-self for which the canvas has long served as her portal. She keeps the energies moving on periodic forays to a quiet studio on family property in northeast Pennsylvania where she says the light of late afternoons is especially long and lovely.
Scroll to read more Cleveland News articles
Join the Cleveland Scene Press Club