Send a News Tip
feel-good stories the key to happiness 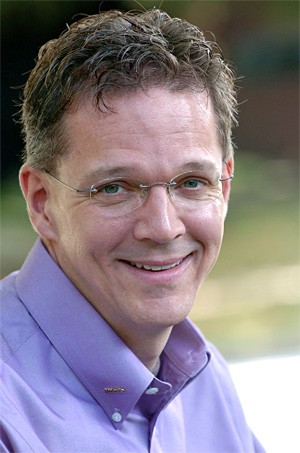 Jim Smith simultaneously munches on peanut butter and jelly while checking his cell phone. With his rimless eyeglasses and black leather briefcase, Smith looks like every other busy executive here at Panera, hastily cramming lunch and work into a 15-minute block.

Yet unlike the others, Smith is surrounded by a half-dozen pamphlets advertising the "13 principles of happiness." He's also the only guy wearing an oversize smiley-face patch. Think of it as advertising for his job. He's the "only certified happiness coach" in Cleveland.

Smith, who could pass for Stephen Colbert's older brother, insists he isn't peddling the same self-help strategies repeated every month in Good Housekeeping. Happiness, he argues, is a skill that can be learned — just like playing tennis. And for around $1,500 a month, he'll be happy to teach you. He has a list of 120 present and previous clients — mostly Cleveland executives — willing to testify this isn't a scam.

Take Elaine Eichman, who oversees scheduling and staff evaluations at the Cleveland Clinic. Five years ago, Eichman was a Type A stress-monger struggling in her career. Nonconfrontational by nature, she would rather have open-heart surgery than voice objections to her boss. Her meekness led to being overloaded with work, which cut into family and free time.

"I felt like my mind was going to explode, between my work and social life," she says.

Then she found Smith, who at the time was teaching at the University of Phoenix business school. During class, Smith mentioned his side career as a life coach — sort of a personal trainer for your brain. He was everything she wanted to be: funny, warm, and commanding. She hired him on the spot.

Over the course of many months, Smith taught her things most three-year-olds intrinsically know: Vacations in warm, sunny places are fun. Books weren't invented for stabilizing wobbly tables. It's OK to take a weekend off from the family. It all makes you a better worker and parent.

"Much of this is not complicated," Smith explains. "Most people think that there's some trick to being happy, but really all you have to do is give yourself permission to be happy."

When her boss saw how much lighter and self-assured she seemed, he asked for Smith's number too.

Nationwide, the study of happiness is spreading faster than a winter flu. "We live in the now culture," explains Sandy Vilas, CEO of CoachInc.com, the largest coaching school in the country. "We want what we want when we want it . . . and people don't think they should have to wait around for happiness either."

So psychiatrists, counselors, and life coaches are making millions by turning the heretofore ethereal pursuit of happiness into commerce. Today, people can even get degrees in "happiness" from Ivy League schools.

Of course, many find the field ridiculous. Why would you pay $1,500 a month just to be reminded to smile?

But Smith is living testimony. Fifteen years ago, he was an operations manager for a supposedly impressive company. Yet every Sunday night he found himself crouched over the toilet bowl, willing himself not to vomit. He hated his boss, hated the stress, and even started to hate himself. His thoughts would wander to his brother Sean, who died of leukemia at 24, and he realized he couldn't stay on this miserable corporate escalator. So he quit — with no idea what to do next.

Then a former colleague asked Smith to be his life coach. "I'd never heard the term before," he says. But when he researched the job, he realized he'd been unofficially coaching people for ages. Why not get paid for it?

After six months of coaching, his first client quit his job, moved halfway around the country, and started up a successful e-learning firm. Turned out all he needed was someone to tell him it was OK to jump. "That's when I started to learn the power of coaching," Smith says.

At first, Smith traveled the country giving talks on such natural uppers as "organizational behavior trends" and "system managements." Even he needed espresso to get through some of the lectures. But five years ago, a conference organizer requested a livelier speech. "Like what?" Smith asked, thoroughly confused.

"I don't know," the organizer shrugged. "Maybe a talk on happiness or something."

That night he stayed up late, reading and thinking about all the things that made him joyous. He came up with a list of 13 principles at the core of his happiness — like choosing a profession with values similar to yours, eradicating toxic people from your life, and eliminating stress by finishing work well before deadlines.

It was simple stuff, but the speech resonated with the audience. "I'd been in business three years, I gave serious talks all the time, but I never got one client" from his speeches, he says. "Then I give one talk on happiness, and people don't leave for an hour afterwards. I thought, 'My God, there's a desperate need for happiness out there.'"

He left with two new clients.

Smith started referring to himself as "the happiness guy." In 2003, he enrolled in a program at the University of Pennsylvania that teaches people how to become happiness coaches. The six-month course covered the history and philosophies of happiness-seekers — from Aristotle to Kelly Ripa. His teachers were Oprah regulars like Martin Seligman and Barry Schwartz.

After graduation, Smith made one final trip to Kinko's, officially changing his title from "corporate life coach" to "executive happiness coach." His business immediately tripled in volume.

But life hasn't been all confetti and chocolate cake. Three years ago, Smith's 22-year-old daughter was driving home from college when a blood vessel burst in her brain. Instead of celebrating Kara's homecoming, Smith began planning her funeral.

Suddenly, the happiness coach was forced to take his own advice. He found it withstood the test of death.

Indeed, Smith so impressed the funeral director with his optimism that he landed a new client. "Here I am, in the middle of my own grief and suffering, and someone is asking me — the father of a deceased child — for advice on happiness," he says with a bemused shake of his head.

"If that doesn't tell me I'm in the right profession, I don't know what will."