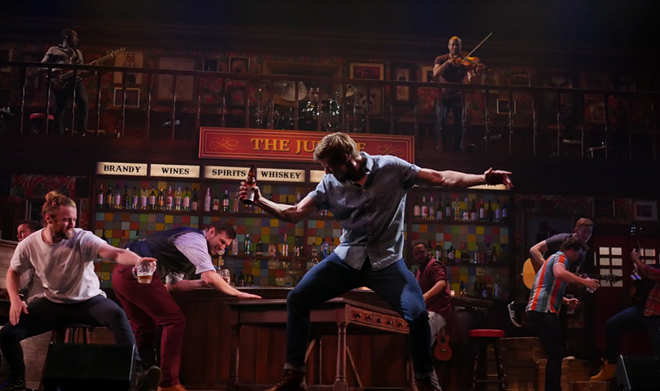 Since most of us have slipped into a coma of one sort or another during the past 15 months, it's time to reach for a defibrillator to jolt us back into consciousness. And if you want to grab these theatrical "paddles of life" and give yourself a healthy jolt, the rowdy fellows who comprise the music-jammed show The Choir of Man are ready to jerk you out of whatever stupor you're in.

This touring show, which has had two other visits to Playhouse Square in recent years, is set in an Irish pub called The Jungle. And even though it looks like a gay bar, with no women in sight, these guys are not looking to hook up with anyone—they just want to sing, dance and stomp their way into your heart. And why not? The Celtic Women franchise on PBS is more than ten years old, with Irish females crooning lushly orchestrated folk songs amid artfully lit castles and flowing gowns. So why not a bunch of lushes in a bar singing while they take a piss. Yes, that's one of the scenes, in the bar's restroom, complete with one singer dousing the shoes of the fellow next to him at the urinal.

That bit of comic, um, relief is wedged into the ample song list, making this 80-minute show a treat for many and maybe a bit of a chore for some others. The degree to which you love Choir may depend on your tolerance for high volume singing of power ballads, testosterone-fueled dancing, and over-used swiveling concert spotlights that frequently bathe and momentarily blind the audience.

After some pre-show noodling and the passing out of free beer for audience members, the narrator of the show Denis Grindel guides the proceedings. He is a charming host as he contemplates the past year or so and celebrates the fact that we're all beginning to commune with each other again. You know, the way human beings used to do in the old world.

There is no real story connecting the songs in Choir. The spirited, inebriated fellows just sing, reassemble and sing again—applying their good-to-excellent voices on tunes ranging from pop to R&B and folk to funk. All the actors also play instruments, some of them well (guitar and piano) and others not so adeptly (trumpet and sax). They are supported by a four-person band that gives the music a solid foundation.

Each of the cast members is given his own featured song. "The Impossible Dream" is sung by the only American on stage, Keith Klein, in a soul-stirring baritone and "Escape (The Pina Colada Song)" is rendered by the bartender, played by the hefty and uninhibited Lemuel Knights. In between are a variety of other songs, often nicely harmonized. The nine-person cast even takes a run at a compelling a capella version of the Sia hit "Chandelier."

As packed as the show is, there are a few elements that are noticeable by their absence. The Irish are known for their storytelling, but there's no story to be found here other that "We're back together, yippee!" That, of course, is a profound thought at this time. But since none of the characters is fully developed, we never have a chance to emotionally connect with any of them. That kind of connection is also something we've been longing for, but since there's no romance going on in The Jungle—straight, gay or whatever—that feels like a missing piece. And if you're anticipating an Irish drum solo or maybe a bagpipe riff, that's also not happening.

Perhaps the most astounding thing about the show is that we're all back in a theater at Playhouse Square. Even though they're only allowing 25% capacity in the theater, which will increase in July as conditions warrant, the experience of sharing a live show with other ambulatory, respirating people is a gigantic treat all by itself.