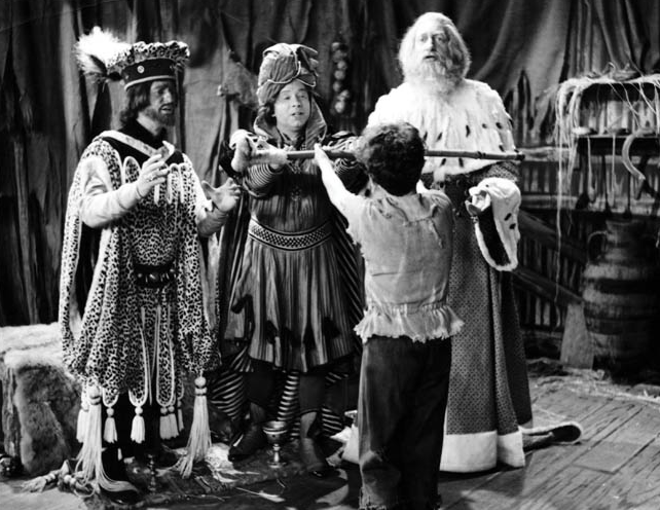 Original 1951 NBC production of Amahl and the Night Visitors
CityMusic Cleveland welcomes back Stefan Willich, the German physician/conductor who also leads the World Doctors Orchestra, as guest conductor for its five-concert December program, to be performed in Cleveland, Parma, Shaker Heights, and Willoughby Hills from Wednesday, December 6 through Sunday, December 10. Willich will lead the ensemble in Schubert’s Third Symphony and Mozart’s Sinfonia Concertante with soloists Miho Hashizume, violin, and Jonathan Bagg, viola. Another returnee to the December festivities, soprano Chabrelle Williams, with be featured in Wagner’s Wesendonck Lieder. All the performances are free, but the orchestra will appreciate donations. Check our Concert Listings page for venues and times, and read a preview article here.

Cleveland Orchestra music director laureate Christoph von Dohnányi has to miss his December dates with the ensemble — he’s recovering from a fall — so Finnish conductor Mikko Franck is stepping in to lead Julian Anderson’s Incantesimi and Brahms’ First Symphony. The concerto du jour, Mozart’s 18th Piano Concerto, will feature the superb Richard Goode. Performances are on Thursday, December 7 at 7:30 pm, and Friday and Saturday, December 8 and 9 at 8:00. Tickets can be ordered online from the Severance Hall Box Office.

Not many operas are “made for television,” but Gian Carlo Menotti’s Amahl and The Night Visitors has become a Christmas classic since its first broadcast in 1951. Anne Wilson directs two performances at Forest Hills Presbyterian Church on Saturday, December 9 at 7:00 pm and Sunday, December 10 at 3:00. The show stars Henry Dyck as young Amahl, Lara Troyer as his mother, Mist’a Craig, Carl Jenks, and Frank Ward as the Three Kings, and Jack Lentz as the page. The church choir appears as the villagers. Performances are free.

Liza Grossman’s Contemporary Youth Orchestra welcomes alumna Sarah Frisof as soloist in Joan Tower’s Flute Concerto for its first concert of the season in CSU’s Waetjen Auditorium on Saturday, December 9 at 7:00 pm. A second soloist, oboist Kate Young — who won the Orchestra’s concerto competition — will take on Ralph Vaughan Williams’ beautifully pastoral Oboe Concerto. The CYO will fill out the program with Mason Bates’ The B-Sides, Clint Needham’s Free Radicals, and Arturo Márquez’s Danzón No. 2. You’ll need tickets for this one and they’re available online.