The Cleveland Blues Cruise Was One Awesome Trip: Slideshow 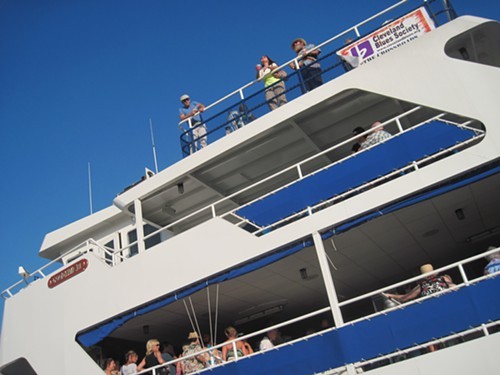 Last night, the first-ever Cleveland Blues Cruise pushed off from the dock at the East Ninth Street Pier and took passengers on a tour of both the Lake Erie shoreline and the rich history of the blues here in town.

The event sold out quickly, leaving many begging for tickets in the days running up to it. Needless to say, there will surely be more cruises like this in the years ahead. The whole thing was organized by the Cleveland Blues Society, and the group's president, John Adams, spent much of the evening honoring the greats who had come before and the musicians who had showed up to play.

And, of course, the music rocked all night as the Goodtime III cruised along the shoreline and up the Cuyahoga River.

The Blues Society specifically paid homage to local legend Bull Moose Jackson. In the late 1940s, Jackson recorded with the Buffalo Bearcats, garnering hits in "All My Love Belongs to You," "I Want a Bowlegged Woman" and "I Can't Go On Without You." His daughter, Margaret Jackson, came up from Louisiana to accept an award on his behalf.

As the cruise continued, the sun sank behind low-hanging clouds and the booze flowed freely.

One of the final jams of the night brought together Colin Dussault and Michael Bay, along with several others. Dussault at one point led the band in a danceable take on Willie Dixon's "Wang Dang Doodle." As the ship headed into port, Bay and Dussault traded lead spots on the song, reeling in the whole night toward a frenzied climax.

Among many things, one thing the cruise accomplished was serving as yet another remind that Cleveland boasts some of the country's most talented musicians. There's absolutely no doubt about that. Thankfully, with events like the Cruise and all the various shows and jam nights throughout the week, this groove-laden music is never out of reach. Just step out your door, listen for the just the right chords and follow the music.