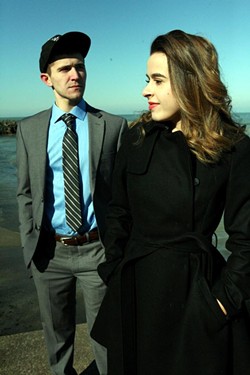 In2ative, see Wednesday April 6
A long list of composers and musical groups have tried to solve the problem of what audiences should hear during Carl Theodor Dreyer’s 1928 silent film classic, The Passion of Joan of Arc, including the Canadian rock band aptly named Joan of Arc. Britain’s Orlando Consort has recently developed a score for the 85-minute movie that consists entirely of French and English music of Joan’s own era. The program titled Voices Heard comes to the Cleveland Museum of Art on Wednesday, April 6 at 7:30, when Dreyer’s masterpiece will be screened and live music provided by the Orlando Consort’s five male voices. Tickets are available online.

Nighttown’s a jazz club — except when it isn’t, quite. This week, two local groups of Cleveland Institute of Music graduates will be featured in sets that bend the flexible borders of classical music in different directions. On Wednesday, April 6 at 7:00 pm, In2ative (flutist Kim Zaleski and cellist Trevor Kazarian) will improvise in a variety of musical styles (reservations here), and on Sunday, April 10 at 7:00 pm, the Cleveland Cello Quartet (Anna Hurt, Carlyn Kessler, Sophie Benn, and Eva Ribchinsky) will fuse classical with pop and jazz in entertaining ways (reservations for that one here).

Dance is high on Apollo’s Fire’s agenda this week as Julie Andrijeski and Steven Player add Baroque footwork both noble and lowbrow to music by Georg Philipp Telemann during “A Harlequin Romance” in four venues including The Bath Church in Akron (Thursday, April 7 at 7:30 pm), St. Noel’s Church in Willoughby Hills (Friday, April 8 at 8:00 pm), The Maltz Center at CWRU (Saturday, April 9 at 8:00 pm), and Gamble Auditorium at Baldwin Wallace (Sunday, April 10 at 4:00 pm). And dueling violinists Olivier Brault and Johanna Novum will add to the fun with J.S. Bach’s double violin concerto in d minor. Tickets can be ordered online.

The Cleveland Orchestra will go multimedia this week with four productions of a pair of thrillingly dark stage works by Béla Bartók. Chicago’s splendid Joffrey Ballet will dance The Miraculous Mandarin, and soprano Katarina Dalayman will suspensefully unlock the seven doors of Bluebeard’s Castle in the one-act opera of the same name (Bluebeard is sung by the Russian basso Mikhail Petrenko). The shows open on Thursday, April 7 at 7:30 pm, with repeat performances on Friday the 8th and Saturday the 9th at 8:00 pm, and on Sunday the 10th at 3:00 pm. You can reserve your tickets for this program of thrills and chills through the Severance Hall box office.

Renaissance lute virtuoso Ronn McFarlane will bring his Renaissance band, Ayreheart, to the area for two performances of “Will You Walk the Woods so Wild.” McFarlane will join Brian Kay, vocals and lute, Will Morris, colascione, and Mattias Rucht, percussion, in a program of Renaissance music from the British Isles including music by John Dowland, William Byrd, and John Johnson, and old ballad tunes from England, Scotland, and Wales. Catch them on Thursday, April 7 at the Bop Stop in Ohio City or on Friday, April 8 at Kent Unitarian Universalist Church (228 Gougler Ave. in Kent). Both concerts are at 8:00 pm, and you can buy tickets at the door.

Three of Cleveland’s new music groups will be producing events this week. On Friday April 8 at 8:00 pm at SPACES, No Exit will feature music inspired by the famous 20th-century dadaist Erik Satie (repeated on Saturday, April 16 at Heights Arts, 2175 Lee Rd. in Cleveland Heights). Both concerts are free.

Five One Experimental Orchestra will put up “Art Music in the Dark,” featuring new works and Cleveland premieres by Marc Mellits, Michael Bratt, Judd Greenstein, Guillaume Connesson, Sarah Kirtland Snider, John HC Thompson, and Jeremy Allen. Identical programs will be presented at the Ensemble Theatre, 2843 Washington Blvd. in Cleveland Hts. on Friday and Saturday, April 8 and 9 at 8:00 pm. You can reserve tickets here.

And the Syndicate for The New Arts will present a joint concert with New York trumpeter (and Oberlin grad) Peter Evans, and Patchwork (Noa Even and Stephen Klunk, saxophone and drum duo) featuring new and improvised music in individual performances and group collaborations at the Bop Stop on Saturday, April 9 at 8. You can guarantee a seat by booking in advance here.