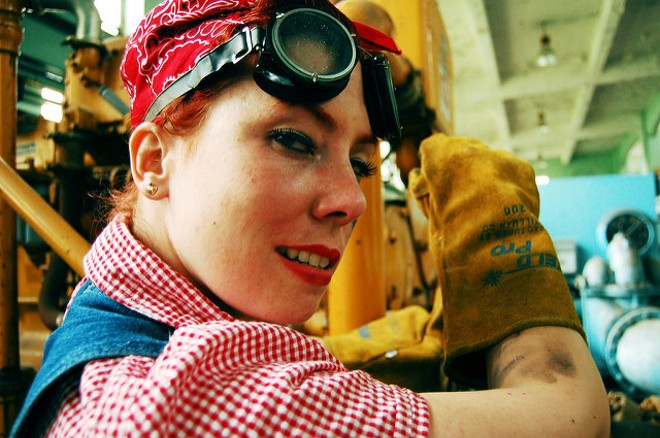 Over the past five decades, the gender wage gap has only narrowed by about 18 cents. (katrinaelsi/Flickr)

COLUMBUS, Ohio - It takes women about 15 months to earn what men earn in 12, although pay inequality is not the only discrepancy Ohio women face in the workplace.

Today is Equal Pay Day, symbolizing how far into 2018 women would need to work order to make the same amount men did in 2017. Data from the U.S. Census show the 2018 wage gap between women and men is about 20 percent.

President of the National Organization for Women, Toni Van Pelt, explained that pay inequality impacts women through their entire careers, affecting vacation time, retirement savings and other aspects of life.

"Equally as important is that if women are kept in a state of constant economic insecurity, they are more liable to feel that they must put up with sexual harassment and sexual assault, in the workplace and in their education," Van Pelt said.

According to the Institute for Women's Policy Research, women in Ohio who work full-time have median annual earnings of about $38,000, which is 76 cents on the dollar compared with their male counterparts. And if current trends continue the wage gap in Ohio will not close until the year 2067.

Van Pelt notes the pay gap is worse for women of color, with Black women's earnings just 63 percent of what their white male counterparts are paid, and Latino women just 60 percent. And the sluggish rate at which the gap is narrowing is also troubling, she added.

"When we first started talking about this, the average full time working woman was earning 59 cents on average," she observed. "So in 55 years, it's only closed by 18 cents. That's a rate of less than half a penny a year."

With increased awareness, more companies are stepping up and exposing pay disparities between male and female workers. As owner of the music venue Rambling House in Columbus, Jen Lynch said pay equality is an issue she cares very deeply about.

"Growing up, my mom defiantly worked for low-pay employment and I just watched her struggle throughout the years," Lynch recalled. "It's extremely important that our employees are they're treated fairly, that they're paid well."

Rambling House is among Ohio businesses highlighting the wage gap by offering a 20 percent discount for women on Equal Pay Day.

Reporting by Ohio News Connection in association with Media in the Public Interest, and funded in part by the George Gund Foundation.