For five years, Andrew McAllister has trailed the words of a man he'll never meet. 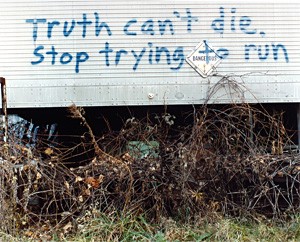 Photos by AndreW McAllister
"I found myself as much in awe of the landscapes he chose as the words he wrote," says McAllister.

For most people who drove by, it was nothing more than another abandoned Akron building with a bit of misspelled graffiti scrawled across the side. "Go Vegitarian. The Better Way, Truly!" announced the bright red letters.

But to Andrew McAllister, it was something special. This wasn't just another tagger. Despite the misspelling, the message — juxtaposed with a McDonald's billboard — had been carefully written, as though the author were a second-grader practicing his best penmanship. "The language was so playful and poetic," McAllister says. "And the simple handwriting and choice of color made it so generic, which is the opposite of what most graffiti artists try to achieve."

McAllister knew it wasn't just some dumb kid with a penchant for mischief. This person was trying to say something about himself and the world around him. If graffiti ever had its own version of an outside artist, this was it. And McAllister wanted to know who he was.

A professional photographer, McAllister had always appreciated Akron's crumbling landscape. He'd lug his camera around town, shooting his subjects, from rock bands to artists, against the city's grittier backgrounds, often just out of view of the main drags.

That's how he came to see the pattern of cryptic messages, always written in the same hand and sometimes scrawled in the playful stanzas of an e.e. cummings poem.

"Hypocrits Hell" was accompanied by an arrow pointing at St. Vincent's Church.

"Taskmaster (so called) Police/Mankind does not like/Any of you! Hates you/All that goes with you," angrily announced a concrete wall lining a once-overgrown field that had been recently trimmed.

"After I found four, I thought, 'What the hell,'" McAllister says. "I started photographing every one I could find."

For the next five years, he spent weekends in search of the graffiti by the man McAllister would come to regard only as "the unknown writer." He eventually uncovered more than 40 pieces.

But they weren't easy to find. McAllister had to think like his phantasmal friend. "I created a mental map of the places I'd found his stuff in," McAllister says. "It was weird too, because they were always just off of main roads or intersections, just slightly hidden from plain sight, and they were always on buildings in questionable shape. I just developed an eye and a sense for this stuff."

McAllister's scavenger hunt took him to places few in Akron had ever seen — beneath bridges, along railways, into dumps obscured by woods, down narrow alleyways. It was always an eerie feeling to stand alone in these desolate spots, trailing this ghost. "I found myself as much in awe of the landscapes he chose as the words he wrote," McAllister says. "He has a real knack for picking places where his stuff will never be painted over, like train cars just sitting in the middle of the woods."

Most of the messages were poetic ponderings about nature and the human spirit, from "Beasts Don't Have Ponder! Word(s) They Are The Truly Innocent" to "Persons are not God." But some took a disturbingly misogynistic turn, referring to women as witches, bitches, or "WBitches." "Witches Are/Witches there/All the Same,/Bitches," the artist wrote.

"It kind of started to freak me out," McAllister says. "At first, I thought this must be some sort of literate anarchist type. Then I thought maybe it's just some madman off his meds."

Soon, McAllister found himself obsessing over the unknown writer's identity. Everyone in Akron became a suspect — from the dishwasher at his favorite diner to the loner at the bar just before happy hour. "I figured it had to be a man, he had to be literate, and he had to hate women," McAllister says. "I had a few hunches, but none of them ever came to fruition."

He decided to hold an art show, hoping to draw out his subject. He displayed around 20 of his best photos — a sojourn into the heart of darkness, not only of the unknown writer, but of Akron. Still, no one came forth to take credit for the massive body of work. "I was hoping that maybe it would encourage him to write a message just for me," McAllister says.

After a while, the unknown writer's productivity began to slow. McAllister suspects he moved to another city. "There were always periods when he'd just disappear," McAllister says.

But he did inspire a slew of copycats. "I found one in downtown that says, 'Industry is a weapon in many ways,'" McAllister says. "It's just stupid. I know that he'd never write something that juvenile and in such plain sight."

On a windy November day, McAllister climbs beneath a bridge near the Towpath Trail. Along the walls, the unknown writer has left three messages. McAllister reads them aloud as if he's reciting Robert Frost.

As he begins to snap pictures, you get a creepy sense of the unknown writer's presence. You try to create an image of a real man in your mind, but it's fuzzy and intangible. "I'd be disappointed to find out who he is now," McAllister says. "It's more fun not to know."