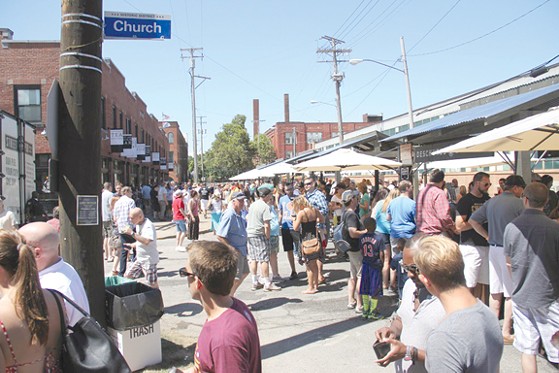 Even if he weren't a deacon at St. Patrick's Church on Bridge Avenue, Franklin-Clinton Block Club president Bill Merriman would be held in saintly regard by his neighbors. He's a former mailman with the U.S. Postal Service and the owner of multiple homes on Church Avenue between West 29th and West 32nd. For years, Merriman has charged low rents to his tenants (which include the annual crop of Jesuit volunteers) to preserve and protect what has long been considered a core value on Cleveland's near west side: diversity.

Merriman is a short, bespectacled, older man who walks with a slight forward hunch and is rarely seen without a beatific smile. His goodness and humility would be ripe for parody if they weren't so sincere. But they are.

On the morning of Nov. 2, 2015, Merriman sat patiently at the Board of Zoning Appeals on the fifth floor of City Hall. He was there to offer a voice of dissent on a variance that would allow the owners of the Schaefer Printing Building on Detroit and West 28th Street to convert the second and third floors into apartment units without on-site parking. The zoning code requires eight parking spaces, but none were shown in the plan.

The owner of the Schaefer Printing Building is, for the moment, Bob Schaefer, but will soon be Graham Veysey and Marika Shioiri-Clark, the married co-developers and christeners of Hingetown. Veysey and Shioiri-Clark told me later that the variance was essentially a technicality. People park in the gravel lot adjacent to the Schaefer Building all the time, they said. The lot is even rented out on weekends to Bounce Nightclub. The city just doesn't recognize it as a parking lot.

"We're excited about redeveloping the whole property," Veysey told BZA chair Carol Johnson at the meeting. "In addition to the lot, looking at those mixed-use plans and having a ton of ... having a long runway in order to figure out what are the needs of the community." 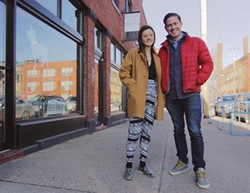 Some members of the Franklin Clinton block club — Bill Merriman, in any case — are worried that the variance is not a technicality at all. Once it's in place (and it's granted in perpetuity), Veysey and Shioiri-Clark will have license to develop the lot however they please. That could mean more bars, more restaurants, more apartments. It certainly won't be a parking lot for long. And though Veysey and Shioiri-Clark have insisted that they won't do anything without a "robust community process," some are yet to be persuaded. (The fact that Veysey wasn't keen on voluntarily postponing the variance request, or making a presentation to the block club, were interpreted as stormy portents.)

"I feel humbled in the shadow of something great coming in," said Merriman, after both Veysey and Shioiri-Clark had spoken. "It's with great trepidation that I present my case before you, Madame Chairman. I'm requesting a postponement and I'm suggesting that an unfavorable decision would be appealed, the reason being that the request for a zoning variance is being presented by the Schaefer Printing Company. Yet we're hearing a case not from the owner, but from a developer who probably has had more favorable coverage in the Plain Dealer and Vanity Fair and elsewhere than anyone I can think of, maybe even more than [councilman Joe Cimperman] — I feel like I'm a devil's advocate, perhaps.

"But in light of that, if I can only suggest that as an adjacent property owner (we live on Church Avenue adjacent to Transformer Station, Tea Revival, to a variety of successful businesses that have graced the neighborhood over the past few years because of Marika Clark and Graham Veysey, there's absolutely no doubt), but part of the package of this entertainment or gathering space, like a piazza in Florence or something like that ... is that it has its challenges. I think the challenges should be heard by the board this morning.

"The harm that we expect is because my wife has dementia, and there are others in the neighborhood who are challenged by the crush of hundreds and sometimes thousands of people who come into the neighborhood to celebrate and to enjoy good food and good wine and beer and fine music. But what has happened, occasionally — and these are extreme instances — my wife has cringed at 9 and 10 o'clock at night wondering what has happened to her life as the music pounds through our 6-inch insulated walls and double-pane glass, as the entertainment district celebrates and draws in so many people from around the area, and enlivens the imaginations of people about life in Cleveland ..."

"Mr. Merriman, I have to stop you," Johnson interjected. "We're discussing the fact that they're going to change it to residential. Two floors of residences only. There's no entertainment, there's no bar here. There's no restaurant here, there's nothing."

"I hear you, ma'am," Merriman responded. "And I'm only speaking for myself, not as a representative of the block club, but this is an entertainment district of which this is going to be a key component. I anticipate that this is going to be developed as well as they've developed the Striebinger Block on West 29th Street. And questions have not been answered in terms of how to deal with the huge crush of crowds and loud, amplified music at 9 and 10 o'clock at night."

"That's something you'll have to discuss with them," Johnson said. "And if there is a development project, maybe in the spring, we'll see it. You'll certainly get a notice and come back again to make your comments. But what we're okaying today is putting in residences. That's it. Six residences. And that's all."

"Yes ma'am. But again — and I hate to use this word — this is a Trojan Horse. This is the beginning of something that is even more than we currently have, even more of a challenge to the residential community that has not had these basic questions answered. The developer and his business partner have great things in store for all of us, but it needs to fit into the larger context of what's happening to a neighborhood that is no longer residential. And as such I offer my objection."

Ben Trimble, director of real estate and planning for Ohio City Inc., chimed in to register support for the variance on behalf of the CDC.

"I think Mr. Merriman is expressing some trepidation by the community because they haven't heard a full plan for this building. But I think it's the case that there just isn't one yet," he said. "We realize that there are a lot of unanswered questions, but there's a lot of work to be done before we come back."

"Really I think the unanswered questions are ones we're still trying to figure out ourselves," Veysey said in conclusion. "But the six apartments, that's the thing we know can give us the runway in order to look at how to responsibly redevelop, with immense community input."