(Updated below with quotes and info from the owner.) 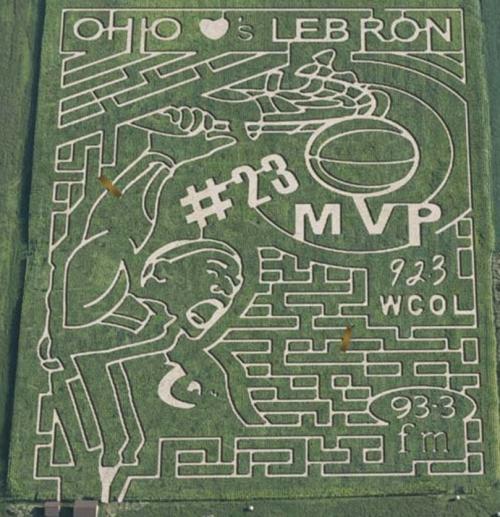 At the Little Darby Creek in Central Ohio.

(Via Hot Clicks via Clubhouse Cancer)

(Updated): Nothing quite says "We love you, LeBron, never leave" like carving his likeness into 9 acres of cornfields. Randy Rausch and his wife Jayne did just that on their land in Milford Center, OH, this year. The couple have run The Maize at Little Darby Creek for the past eight years, and after maze designs of Rascal Flatts and Jack Hannah, the couple decided to show Ohio's favorite son some love in their latest outdoor installment.

Planning for each maze starts in the early summer, so it was June when the LeBron plans began in earnest. For each design, the Rausch's work with a maze company out of Utah that takes ideas and drawings and turns them into agricultural artwork. "We plan it when the corn is small because it's easier to lay out the lines that way," says Randy Rausch. "And essentially you plant the corn criss cross fashion instead of in rows, and you just count rows off. The bottom of the basketball is down here, so you might count off 30 rows across and 10 rows up." When the Cavs traded for Shaq, they were already in the throes of the design and pondered including the Big Cuyahoga until deciding that squeezing the big man into the frame probably wouldn't work.

Located just 30 miles from Columbus, the Rausch's are hoping that when the Cavs visit Columbus for their final preseason game on October 21 that the King himself might show up and take a gander. So far, no luck though. "We've tried, but it's hard to get through all the layers to get to him," laughs Randy. With the attention that's bound to come from literally planting an image of the reigning MVP bigger than any Nike Witness billboard on his land, maybe he'll have some luck. If not, he's happy to host all adventurers who want to embark through the LeBron maze. If you think you can conquer the corn Cavalier, stop by www.mazeandberries.com for hours and directions.