They said Rodney Lemons had the game to go pro. Now he's down to his last shot. 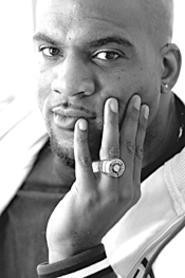 Walter Novak
A stabbing in Wyoming left Rodney Lemons a quarter-inch from death.
The basketball court at Beachwood High School is so spit-shine clean, it practically glows. Middle-aged men in knee braces and goggles run up and down the floor, their sneakers as white as their skin. When Rodney Lemons shows up with his long mesh shorts, cuffed black T-shirt, and flashy earring, asking for half the court, the men guffaw. We've been playing here every Tuesday night for 15-plus years, they inform him. "Who are you?"

For a moment, Lemons thinks about smarting off. You want to know who I am? Why don't you check the Beachwood High record book, see whose name still comes up under the title "All-time Leading Scorer." Why don't you check for the name of the only Beachwood player to play in the NCAA Tournament? Oh, right, that's me too.

But Lemons says none of this. Instead, he drags his gym bag to the side and starts shooting at an adjacent hoop. The very fact that people must ask who he is shows the depths to which he's sunk, the promise he's not fulfilled. The truth is that Rodney Lemons -- 30 years old, tall and muscular -- is bereft of heart. He's down to his last chance for a career in hoops, and he may give up his world to make it happen.

In 1992, Rodney Lemons was a brand name in Cleveland hoops, as recognizable to East Side fans as the Nike swoosh.

Every morning before the first bell sounded, then-athletic director Bill Schumacher could hear the ping-ping sound of Rodney shooting baskets. He was there again at lunch, again during study hall, and was the first to arrive at practice after school.

"I haven't seen anyone before -- or anyone since -- as devoted as Rodney was," Schumacher says.

Listed one of the 100 best high school players in America by some scouts, Lemons had his heart set on the University of Michigan. But as the only son of a single mother, Lemons -- whose father died when Rodney was 13 -- needed a full scholarship. Michigan never came through, and as graduation approached, Lemons felt a sickening helplessness. He had spent all his time concentrating on the Wolverines -- hadn't even responded to other colleges. A last-minute scholarship from Wyoming's Casper College seemed the only way to stay in the game.

In Casper, Lemons found himself one of only a handful of black students. He'd stay a year or two, he thought, get noticed by the major colleges, then transfer. In the meantime, he stuck close to his black teammates. Too close.

At a party in 1992, Lemons and four teammates got into an argument with a student who was doing some racist trash-talking. The moment became heated. People stood outside the party with bricks, waiting for the players to come out. They escaped back to their dorm, but a mob followed them: A classmate -- one whom Lemons considered a friend -- chased him to his room and stabbed him in the arm three times with a hunting knife. Lemons was rushed to the hospital, where, he later learned, a doctor proclaimed him "less than a quarter-inch from death."

His recovery dragged on for months, and during that time he suffered other setbacks. Casper College booted him from student housing for allegedly verbally abusing fellow students. The man who stabbed him got off with probation. The lawyer he later hired to settle a civil case disappeared with his money. When Lemons went home for winter break, his coach suggested that it would be best if he didn't come back.

After recovering at home, he accepted a scholarship from a junior college in Illinois. A solid season there led to a full scholarship to the University of Tennessee-Chattanooga. Lemons was elated; finally, he would play Division I ball. He called everyone he knew and told them to look for him on national TV. Indeed, he did make the small screen: One regular-season game was called by Dick Vitale, a legend in college hoops.

"Hearing him call my name was like hearing the voice of your mother when you're lost in a mall," he remembers. "I felt found."

Lemons earned acclaim as an all-around player in his first season with the Mocs, averaging 9.5 points and 4.5 assists at point guard. "[Rodney] has every skill. He can handle it, shoot it, and defend," proclaimed coach Mack McCarthy.

The team shined too, earning a spot in the NCAA Tournament, where Lemons went head-to-head with star guard Ray Allen and the Connecticut Huskies. The game, broadcast on CBS, was the defining moment of Lemons's life. One of his shots was the Play of the Day on ESPN's SportsCenter.

But a few days later, he crashed. Lemons tested positive on a surprise drug test; a result, he claims, that had to do with a medication he was taking. No matter. His scholarship was rescinded, his Division I glory finished. He squandered the rest of his college days in obscurity at St. Vincent's in New York, where an assistant coach swore he'd be able to get him a spot on an NBA team. Lemons didn't even make St. Vincent's starting lineup.

Dejected, he came back to Cleveland. "I didn't know who to trust anymore," he says. A decade of wandering followed. He went from NBA camp to NBA camp, always making it to the final 20, but never anything more. So he pursued a job in the lesser leagues. At one point, he begged a coach at a USBL camp: "Please, just tell me I'm not good enough. I can deal with that. At least I'll finally be able to hang up my shoes for good."

And so the suffering continued. Every year, he'd pony up his game, then get shot down and head back to his mother's home. There, he'd pass his time in a string of meaningless jobs -- security guard, gym manager -- until the next round of auditions.

"It was not much fun to be Rodney Lemons's friend then," the usually chipper athlete says woefully. "I took offense at small things. I couldn't laugh . . . It hurt more than anything when people would ask who I played for, and I'd have to answer, 'Nobody.'"

Rodney would take his frustration out on the basketball court, where he'd stay, night after night, shooting hoops until darkness settled.

One year at Thanksgiving his mother, who had stood by her only son for years without saying a word, suddenly burst out: "Why are you not playing in the NBA? You're just as good as any of those players."

"I wanted to cry," Lemons says. But the question spurred him to action.

Rodney had flirted with the idea of going overseas, but pride ("I thought I was better than that") and circumstances (a daughter, Sydni, was born in 1999) kept him tied to the States. Last year, 12 months shy of his 30th birthday, he decided it was time to vanquish his ego. He put together a highlight reel and shipped it overseas. Before long, he received offers from teams in Israel, Spain, Puerto Rico, and Greece. He leaves for Athens in September.

"I hope it's not too late," Lemons says. "There's a resurgence of youth playing at the high level. This business wants to get as many years out of you as possible."

At the Beachwood gym, he pauses for a moment to watch a youngster take a shot, then shouts encouragement.

A few months ago, Lemons was mentoring a young athlete when he ran into his former football coach, Joe Perella, now the athletic director at Beachwood. The two got to talking, and Lemons confessed that there was one thing still missing in his life. He'd never been named to the school's hall of fame.

Perella got back to him. The booster club is currently erecting a new wall for athletes who slipped through the cracks. Rodney Lemons will be the first name honored.

The news brings a wide smile to Lemons's face. He won't be playing in the NBA, but at least during Beachwood's open-gym time, people will no longer wonder who he is. They'll be able to see for themselves.