The NFL Draft is Finally Here, But Will Browns Fans Have Anything to Celebrate? 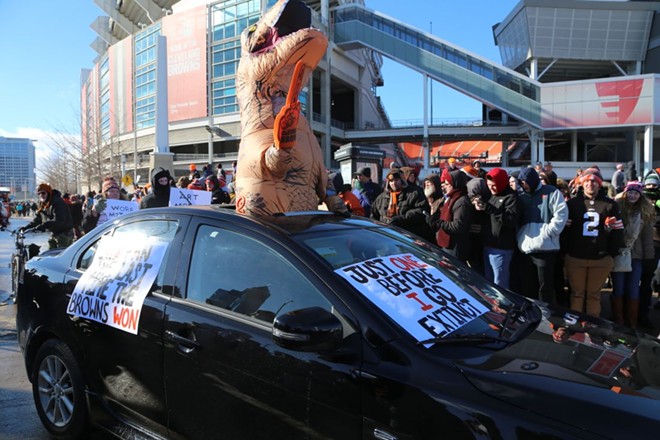 Emanuel Wallace Photo
Today, the Cleveland Browns once again find themselves picking from the Top 10 of the NFL draft's first round. And for Browns fans, the NFL draft has become somewhat of a holiday. It's been this way for some time.

New Browns General Manager John Dorsey — who had success with the Kansas City Chiefs, as they went 43-21 in the four seasons Dorsey was GM — may say the right things, but it's hard to expect anything but disappointment when it comes to the Browns.

This year the Browns draft at No. 1 and No. 4 overall. But like in any sport, the draft rumors are already breaking the internet.


Just to add a bit more murkiness to top of draft: one NFL executive said this morning that Baker Mayfield is “definitely” in Cleveland’s conversation to become the No. 1 overall pick.

Not just the Denver Broncos talking about trading back; so are the Cleveland Browns, who have shopped the No. 4 overall pick, per sources.

Could the Browns just be bluffing about Baker Mayfield to get the Jets to move up to take him? This would be a Keyser Soze-like move.

These are typical national rumors for this time of year, but in our minds it will probably play out something like this: The Browns move out of the No. 4 overall pick only to draft a guy four people have heard of, accumulate more useless draft picks and leave the fans scratching their heads. Naturally, our hope is for the Browns to get it right, but ... that's what we want every year.

No one truly knows what the Browns are going to do with their first round draft picks until NFL Commissioner Roger Goodell stands in front of a booing crowd and announces it to the world.

Seriously though it shouldn't come down to Baker Mayfield. To use the No. 1 overall pick on a QB such as Mayfield is just irresponsible. Mayfield was the Quarterback for the University of Oklahoma, and after three seasons with the Sooners, he declared himself for the NFL Draft. Mayfield is an undersized quarterback, with great athletic ability and has off the field issues. The Browns have been down that pothole-filled road before with Manziel, and they blew out all of their tires.

Of course these three young quarterbacks aren't without flaws. Darnold with his turnovers, Allen with his inaccuracy and Rosen's durability are all issues Dorsey needs to seriously evaluate.

There are no guarantees in the NFL draft, but there is common sense. You don't take someone who can disrupt your locker room (Mayfield), and enough with quantity over quality for this team. Stay at No. 4 and take the best player available. Whether that's defensive end Bradley Chubb out of North Carolina State University, or running back Saquon Barkley out of Pennsylvania State University.

This is the draft the Browns can stop trying to outsmart themselves and get the players they want. Or they can ruin yet another season, resulting in being torn to shreds by the Dawg Pound.

No matter what your feelings are for this draft, it always helps being surrounded by other fans indulging in some great food and alcoholic beverages. Head here for a great list of Northeast Ohio sports bars.

The NFL Draft begins today at 8 p.m., and runs through Saturday.