The Ohio State Fair May Be Canceled, But Its Mini Butter Cow Competition Is Not 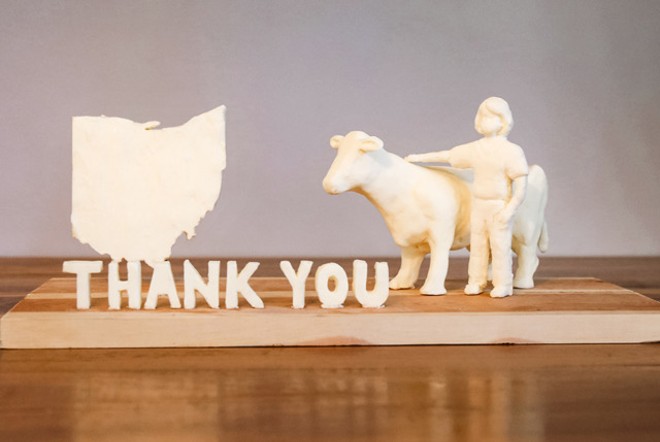 While the Ohio State Fair is once again canceled in 2021 due to COVID, the American Dairy Association Mideast (ADA Mideast) is keeping at least one tradition going: the butter cow.

The annual creation of a gigantic butter cow and her calf has been a time-honored staple of the Ohio State Fair since 1903. This year, since there is no fair, the ADA Mideast is inviting the public to participate in a sculpting competition at home.

This is the second year in a row it has hosted the build-your-own butter cow challenge. This year's contest kicks off July 19 and runs through Aug. 8. To enter, sculptors just have to share a photo of their creation on the ADA Mideast's Facebook page (with a comment), or upload their photo with the hashtag #BuildYourButterCow and tag the ADA Mideast's Twitter or Instagram account.


The winning mini butter cow will be announced Aug. 9, and the winner will get a YETI cooler "to keep their butter masterpiece chilled," says the ADA Mideast.

Butter cow enthusiasts won't have to blindly mold their masterpiece. Paul Brooke, the fair's lead butter cow sculptor for more than 20 years, has created a step-by-step video to show you how to make your buttery bovine. ADA Mideast says all you need to get started is "a pair of latex gloves, a 12-inch-by-6-inch wooden board and at least two pounds of butter." The organization also recommends "crafting tools" and armature wire.

The typical Ohio State Butter Cow uses more than 2,000 pounds of butter in its creation and is the most-visited attraction at the fair, says the ADA Mideast.

"The butter displays are brought to life each year by a technical sculpting team, all from Ohio, who spend more than 400 hours carefully chiseling every small detail in a 46-degree cooler," reads a release. "The displays have evolved along with the tradition, with sculptors creating increasingly elaborate designs to live alongside the butter cow and calf in the cooler."

Past vignettes have paid tribute to historic Ohio moments, like the 50th anniversary of Neil Armstrong's Apollo 11 moon landing, the film A Christmas Story and championship wins by the Ohio State Buckeyes and Cleveland Cavaliers.

“Creating the butter cow is something I truly look forward to every summer, and I love that I can share the joy of creating these unique sculptures with everyone. Perhaps there is a future butter sculptor among us who will get their start making their own mini butter cow, but even if you’re not an artist, everyone is guaranteed to have a lot of fun,” sculptor Brooke says in a release. “The whole team is eager to get back to the butter cooler next year to come up with new ways of replicating iconic Ohio moments, symbols and history in butter that will amaze fair crowds.”