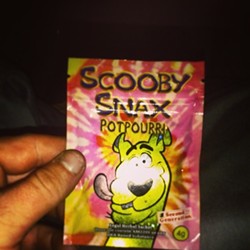 The owners of the Twilight Boutique chain of head shops have been indicted on charges of federal conspiracy, drug and money laundering. Sean and Sherry Lightner of Grafton Township allegedly used their boutique chain to sell synthetic marijuana.

Despite the whole illegal thing, the crime itself isn't exactly original. A head shop selling something that can get you high? While it's certainly wrong, finding an illicit substance among the bongs, pipes, rolling papers and exotic tobacco products typical of a head shop - not too shocking.

The Lightners did take steps to cover up their scheme, including selling the synthetic marijuana as potpourri and slapping on a "not for human consumption" label. Extra sly measures were also taken, including telling employees to keep the price list out of public view, and forbidding the sale of the drugs and paraphernalia in the same transaction. The Lightners also marked the drugs up by about 300 percent, ensuring a profit worthy of the risk.

The couple used their dirty money to live the high life, purchasing a house, multiple cars and a boat. Prosectors are pushing for the forfeit of the house and cars, as well as over $225,000 in cash that was seized during the investigation.

The Twilight Boutique in Elyria was shut down on Thursday, but the ten other locations, including one in Lakewood, are still open.

Cecily Rus joined Scene as a blogging intern in September 2013. She is a recent graduate of Colgate University, where she majored in English/Creative Writing. She has previously interned at Scene Magazine in Boston. Her interests include traveling, cheeseburgers and Game of Thrones. Cecily is a Lakewood native...
Read More about Cecily Rus
Scroll to read more Cleveland News articles