'The Panther Dancer' Frenetically Tackles the Jackson Five, But Could Use More Focus 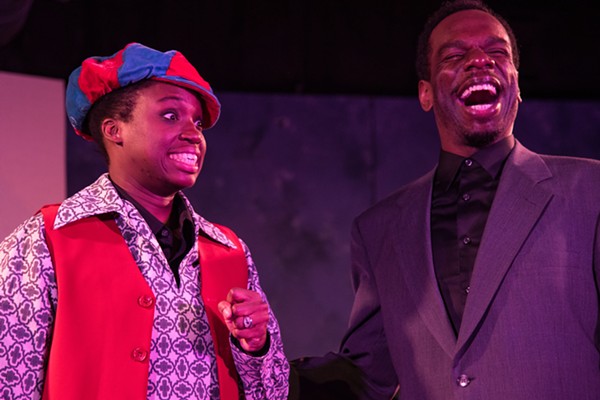 Grace McC Photography
A show about the Jackson Five? That isn’t a jukebox musical? And that’s funny? How can you miss?

Those questions and more are answered in The Panther Dancer, written by Logan Cutler Smith and being produced by Playwrights Local till the end of this week. As directed by Jimmie Woody, it’s a wild rush of mini-scenes, sort of in the style of the vaudeville play-turned-movie Hellzapoppin’, relying on a frenetic pace and constant role-switches to feed the entertainment value.

The story, of course, centers on The Gloved One, Michael Jackson, as we see his pathway from the youngest member of his family’s singing group to the King of Pop. The basics of that story are known to most of us, and the show feeds of that familiarity with inside jokes that long ago came outside. These include the terrible, bullying nature of father Joe Jackson and some of the particulars regarding Michael’s siblings.

This work, that had its first exposure at the NEOMFA Playwrights Festival at Convergence Continuum Theater, has a number of witty lines. But over the course of two hours, the jokes fall into similar patterns and become predicable and eventually tiresome. And the playwright spends too much time exploring small facets of the MJ story that will seem arcane and off-point to most observers.

Of course, there are more “celebrities” in this show than in the “We Are the World” video, along with movers and shakers such as Berry Gordy of Motown, Michael’s lawyers, and pretty much anyone else who came within an arms length of the Jackson clan.

Director Woody employs his substantial skills in staging the piece so that those flaws don’t drag everything down. And he’s partially successful, thanks to some yeoman work by the cast. Andrea Belser is a standout, both as Michael Jackson and as the moody, purple-robed Prince and Robert Branch lends his quirky take to many different characters. Corin B. Self, when portraying daddy Joe, is truly fearsome, and Anthony Velez is a whirling fount of dancing energy when he mimics Jackson’s famous panther dancer video. Although she doesn’t quite dazzle like the others, Kim Simbeck often plays the necessary straight man to the frantic activities of the others.

Trouble is, the script is an overly detailed chronology of Michael Jackson’s stormy life, and it has no point of view. It swings wildly from poking fun at “Wacko Jacko” to weeping over his demise at age 50.

Instead of a two-hour show with one intermission, this play cries out to be a 75-minute nonstop race to the finish that would make The Complete Works of William Shakespeare look like a particularly slow-moving episode of Murder She Wrote. Now that would be a thriller.