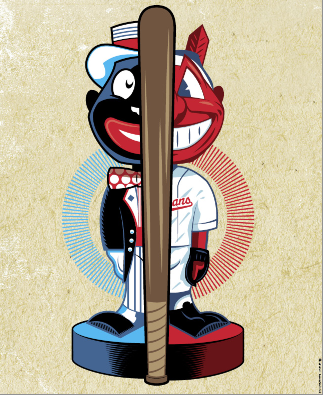 Last week, The Plain Dealer took an “historic stance” (that’s the paper’s term) in opposing Chief Wahoo as a logo for the Cleveland Indians (they were mum on the team name and, uh, all relevant cultural context). Pretty forward-thinking stuff, really, and they self-celebrated in due fashion with just a smidge less zeal than when Mary Kay Cabot passes along her incomparable brand of beat reporting by tweeting whatever bit of Browns news ESPN broke yesterday.

The paper’s main argument here buzzed around the inevitability of Wahoo’s dissolution, which is not what you would call a meaningful argument. The geniuses over there pose a question, paraphrased here: Why not just rip off the Band-Aid and get the PR hassle over and done?

Wahoo Nuts, predictably, flipped their shit on the Plain Dealer. The Cleveland.com comments section eclipsed all other bouts of insanity from its past. Truly, it was a sight to see.

Interestingly, the paper’s writers, often clamoring into the comments section to rep their “digital first” mantra, were nowhere to be seen. Also completely absent from the discussion was the newspaper’s Jan. 17, 1915, editorial cartoon that degraded Native Americans as subhuman and incapable of communicating. Google it. An umpire is seen saying to a Native American ball player, “When you talk to me, talk English, you Wukoig!” The artist emphasizes that “that last word is in Indian.” The cartoon is unbelievable, and it was all kept quietly under the rug this week.