'The Reckless Ruthless Brutal Charge of It, or The Train Play' Chugs Along Pretentiously at convergence-continuum 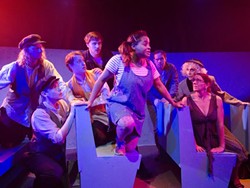 CODY MOLNER
Perhaps you’ve mused, from time to time when on a bus or other public conveyance, that every anonymous person around you must have an interesting story to tell. And if you could only go up to each one and ask them, you’d be swept away by their unique experiences and perspectives.

Well, you can forget that, based on the stories that are unloaded during The Reckless Ruthless Brutal Charge of It, or The Train Play by Liz Duffy Adams. Far less exciting than other train-centric yarns such as Strangers on a Train or 3:10 to Yuma, and a good deal less profound than Thomas the Tank Engine, this trip is on a one-way track to Pretensionburg—with rest stops at Obfuscationville and West Whatthefuck. Of course, this train isn’t just any old train, it’s a chug-chug metaphor for all of our shared journeys to meaning, relevance, immortality, or a quickie in the last row.

Each of the characters hauls around a one dimensional persona that they are then challenged to make entertaining. The con-con cast under the direction of Clyde Simon often does a remarkably good job at that. Laurn B. Smith as the scientist who wants to be a bird (or just get laid) is hot-wired and focused. Taylor Tucker shows promise as the 12-year-old wanna-be superhero, the Leopard-Girl (although her moniker often sounds like “Leper-Girl,” which would be a whole different thing). And Jack Matuszewski is a hoot as one of three Russians who are traveling to support world peace. His Jim Nabors-like switch from his fey, scarf-twirling sighs to his basso profundo voice when he sings is most amusing.

Cody Zak is a bit too torqued as the torturously named Gabriel Angelfood, and Robert Branch never quite releases his compelling stage presence as another Russian. As Gaia, the Earth Goddess with a potty mouth and a gun, Marcia Mandell deploys an amorphous accent that shifts, intentionally or not, from England to Back Bay to Fairview Park—but somehow it works.

As for the plot, well, never mind. Each of the characters just gets up, riffs for a while about random topics—angels, humanity, yadda yadda—than sits down again. For a theater that used to employ video in almost all their shows, that technique is oddly absent here when it could be used to great effect as a moving backdrop for the train. Instead there aren’t even train windows on the back wall.

There are laughs at times, but this is a train that one should board with some caution. Hell, it almost makes one long for Starlight Express, in which the toy train cars come to life and roll around on skates. At least that show’s dime-store philosophizing had some movement.