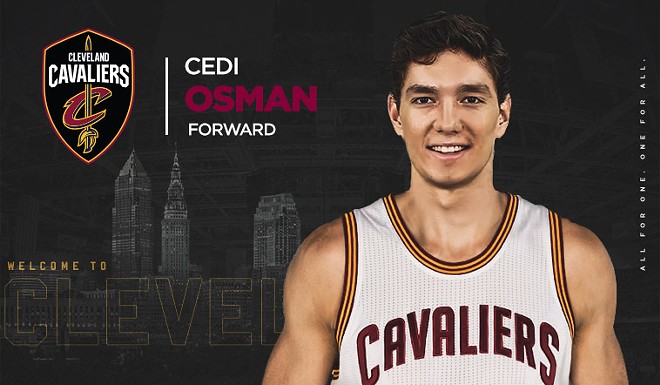 Courtesy Cleveland Cavaliers / cavs.com
On Nov. 20, 2013, Matthew Dellavedova emerged as the scrappy backup point guard that fans would grow to adore over his three seasons and 215 games in a Cavs uniform. It was a coming-out party, marked foremost by defensive intensity.

Last night, rookie Cedi Osman had a loosely equivalent game. Osman, a native Macedonian, has shown flashes of potential during this, his rookie campaign. (Remember that insane full-court pass?) Coach Tyronn Lue played him sporadically during November and December, while Isaiah Thomas and Derrick Rose recovered from injuries. We hereby note that it is only with effort that we recall this period of sustained victory, this improbable period of Jose Calderon running point.

But Osman's chief contribution to date has been vocal exhortations and goofy fist-pumps on the bench. He behaves basically how fans would, erupting with glee at every LeBron dunk or late-game three. One senses he feels blessed by the opportunity to gaze upon this all-time-great at close range.

Last night, Cedi played 21 minutes and provided the defensive spark which — alongside LeBron's overtime heroics — led to a desperately needed Cavs win. The Wine and Gold defeated the Minnesota Timberwolves 140-138.

Here was a young man, by his own account, "thirsty" for action, a man who hustled on the defensive end and actually jumped for rebounds. Here was a lanky European who gave less than two shits about his haircut, who used his size and speed to his advantage, who made two three-pointers to boot.

His victory chest-bump with LeBron may actually have been the greatest moment of his life:

Both Coach Lue and LeBron celebrated Cedi's effort after the game.

"He's going to make mistakes, which is okay, but his purity of the game is infectious to our team," James said in the locker room. "He hasn't been in many situations, so he's not even going to trip about what's going on. He's going to play his game. And he's been in professional basketball since he was 14 years old, so he plays the game the right way. It's great to have him."

The team needs him right now, not only for his infectious game play but for his ability (unlike many of his teammates) to have fun out there. Fans have been hard-pressed to find any scrap of enjoyment from this sad-sack assortment of achy primadonnas, to say nothing of this Dan-Gilbert-led front office abomination, destitute of vision and competence. In Cedi, we are finding a reason to fall in love again.

But young Osman's performance was the night before the NBA trade deadline. It's a good bet that rival executives, having gazed forlornly upon the unappetizing roster of extravagantly paid geriatrics, won't be able to find much else to entice them into negotiating.

The Cavs need to make changes. They simply need to get better on the defensive end. The personal dramas and competing egos are too much to bear. And so if the coveted first-round Brooklyn pick must be parted with today, then it must be parted with! To do nothing at the trade deadline with LeBron still on the roster (likely for the last time) would be a grave error in judgement.

It's just tragic that Cedi Osman, one of the few bright spots during these trying times, might have to be parted with as well. In one view, Cedi's minutes last night (and the effusive post-game accolades from his coach and teammates) may have been part of a strategy to buff up a trade asset.