Forgive Us Our Trespasses

The world called Paul Pelton the 'Nightcrawler of Lorain' after police arrested him for videotaping a grisly crash scene and trying to sell the footage. It was a devastating story, except it wasn't true.

During the phone conversation, Pelton was reminded of his skepticism. He had been interviewed by Channel 8 in connection with an accident at the Medina Gun Show in 2013 and felt at that time that his comments had been misrepresented.

"So I'm familiar," Pelton said. "And on the phone I'm like nah. But they were hounding, saying, you know, 'How would you want it portrayed?' And basically however they could get the video from me. So I said I would need some sort of commitment from you to make sure that you use this video to talk about teens' driving, and I go, as a matter of fact, don't you do charity? Why don't you donate to Bikez 4 Kidz and give me some fuckin' bicycles?"

Bikez 4 Kidz, Pelton admitted, was a charity that he'd been trying to get off the ground for awhile, but hadn't been able to sustain steady bike donations. He runs a custom auto shop that caters primarily to motorcycle enthusiasts and felt that providing bicycles for local kids was a fitting way to give back. Though it was never reported as such by the stations with which he interacted, Pelton only ever asked for bikes, not cash. From the Channel 8 story: "Pelton did not turn the recording over to authorities. Police said he posted the video on Facebook and attempted to sell it to two news stations, including Fox 8 News, but we declined."

From Channel 5, a little closer to the truth: "The man offered the video to news organizations, including NewsNet5.com. In a Facebook message, he asked for a donation to a charity with which he's involved in exchange for the video. NewsNet5.com declined, even before we saw the video, because our policy is not to exchange money for content."

After Pelton hung up with the Channel 8 producer (and went back to sleep for an hour or so), he began writing a message that he would send to both Channel 8 and Channel 5. One minute before he sent it, though, at 12:08 p.m., he received the following from Channel 8 web producer Darcie Loreno:

Hi Paul, I am a web producer for Fox 8 News in Cleveland. I saw your incredible video of the horrible crash last night. We are doing a story on the crash, and how things like this can be prevented in the future — and touch on the importance of safe driving, etc. Would it be possible to get permission to use a piece of your video or screen grabs of the damaged car? Unfortunately, we are unable to pay for any video, or even donate. We could get in big trouble by our corporate office in Chicago. But we still would love to at least get this out there. Is there any way you could help us? We could link to your Bikez 4 Kidz sight on our website. Thanks so much, Darcie.

Concurrently, Pelton sent his message asking for bike donations in exchange for the video's use. To that message, Fox 8 replied, "Fox 8 does not pay for news video. Thank you for contacting us." Pelton didn't argue. "No problem," he wrote.

It was a similar story with Channel 5. After Pelton's initial message, their exchange went like this:

Channel5: We'd love to see your videos, but unfortunately, our code of ethics prohibits us from paying for footage. If you'd like to give us permission to use it, we will give you the media courtesy. Thanks!

PP: Would media courtesy be asking the public to make a donation to my charity? I'm low on donations and need some bikes to pass out. The demand is much greater than the supply.

Channel5: No, I'm sorry. It would say, "Courtesy Paul Santucci" [Pelton's former Facebook alias.] If you're interested in us doing a story about your organization, please send information to [email protected], (but know that we do not promise coverage in exchange for favors, either).

PP: Understood. Thanks for your time.

Channel5: Have a great day, and good luck!

Fox 8 News director Andy Fishman told Scene, when we attempted to follow up with Channel 8, that he thought his team "played it just right."

"They were aggressive in pursuing the story," Fishman said, "in the same way that [Scene] would be, but we never indicated that we would pay for the video."

The issue, though, isn't that Channels 8 or 5 might have paid for crash footage. It's that they both wanted the video, yet both published stories that obfuscated the nature of their interactions with Pelton. They cast themselves as blameless accessories in Pelton's morally depraved freelance videography when in fact they were the ones hunting the video down.

That they chose to publish misinformation from the Lorain Police on their interactions without clarifying their roles is another issue: Collusion? Lazy journalism?

For Pelton, the results were the same either way.

Pelton is now standing  (pre) trial for his misdemeanor charge, a charge that was explicitly framed by Lorain Police as a punitive measure for his insensitivity at the scene of the crash.

"To me this is very egregious," LPD Capt. Roger Watkins told the Associated Press. "This is not the way people should treat each other."

But what of the others who were snapping pictures and posting footage of the crash? 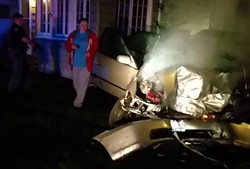 Courtesy: Paul Pelton
Another neighbor, with cell phone in hand, at the scene of the crash.

"I knew my daughter was gonna share it as soon as I posted it," Pelton told Scene. "Matter of fact, they kinda hounded me to post it so they could share it. At that point, they're in competition because [a neighbor and peer] already posted pictures and now my daughter wants to compete with hers as far as, look at my footage compared to yours."

Budway went as far as to say that it's "routine," these days, for people to take photos and video of car crashes like this.

"The only exception here was what [Pelton] captured at the end — how police removed the passenger," Budway said. "My opinion is that this is retaliatory."

Budway said that the already unusual misdemeanor was made all the more unusual by the fact that police brought the charge without witness statements or the complaints of the vehicle owner.

"It's not like I walked into your car and took your Taco Bell off the front seat," Budway said.

At press time, Sgt. Buddy Sivert had not yet responded to questions regarding Pelton's charges and the nature of his arrest. Given Budway's experience as a municipal prosecutor, he suggested that for this type of charge, a citation would have been much more appropriate.

"They didn't have to humiliate him by going to his house and putting him in handcuffs," Budway said.

Pelton said, in light of the trial, that he'd rather not comment on his treatment by the police, but did say that he felt the arrest was designed to intimidate him.

"What was odd to me was that news vans were already at the police station when they took me in. The media was contacted prior to my arrest. And they were ready to put the story out," Pelton said. "When the story hit, they interrupted programming to put me out there. They interrupted people's soap operas. What do you call that? A newsflash? They put it like I was some villainous person that committed some horrible crime, like I was Hitler."

Or, in the preferred language of the media, like he was Nightcrawler's Louis Bloom.