Things To Read That Might Not Suck: Rooting for J'Nathan Bullock Edition 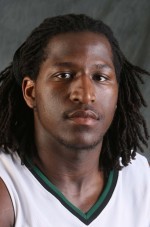 — Cleveland State basketball standout J'Nathan Bullock is working out for a handful of NFL teams, hoping to catch on as a tight end. Here's to hoping he lands somewhere. He's a beast. (Pro Football Talk)

— Sports Illustrated catches up with Cliff Lee for some random questions. People think he looks like Kevin Bacon, he wants to sing like Barry White, and... well, it's pretty boring, but whatever. (CNNSI)

— Sports Illustrated also rolled out their annual baseball preview, which must be wrong, because they have the Indians finishing second in the AL Central. (CNNSI)

— You might think an exclusive interview with Tribe GM Mark Shapiro would be interesting, illuminating, etc. It might be if you love the draft, but otherwise, the conversation is very generic and centers on how the team evaluates talent. (With the First Pick/Real Baseball Intelligence)